‘A Catholic Guide to the Holy Land’: An interview with a biblical archaeologist

Fr. Charles K. Samson is a priest of the Archdiocese of St. Louis, Missouri, and the author of what he describes as a “portable guide that blends archaeology, Scripture, early Christian history, theology, prayer,” and his own experience in the Holy Land. A challenging enterprise, to say the least.

But Fr. Samson seems to be the proper person to undertake it: he got his Bachelor’s Degree in Sacred Theology at the Pontifical Gregorian University, and a License in Sacred Scripture at the Pontifical Biblical Institute in Rome, during which time he studied language, history, and archaeology at the Hebrew University of Jerusalem. A doctoral candidate in the Biblical Theology department of the Pontifical Gregorian University, now Fr. Samson helps lead the Holy Land Retreat and Pilgrimage of Kenrick-Glennon Seminary, and provides all those interested in visiting with a Catholic Guide to the Holy Land, a book written not only for pilgrims, but also Catholics living in the region: all the proceeds from the book’s sales are to be passed along to the Latin Patriarchate Seminary in Beit Jala, Palestine.

Aleteia: Biblical archaeology is commonly thought of as primarily related to diggings in Israel, the Promised Land. But a closer look might reveal The Holy Land is comprised of other territories as well (Syria, Jordan, Lebanon, Palestine, Iraq and so forth). Would you agree on differentiating the Promised Land from the Holy Land? Is that something we can find in your book?

Fr. Samson: I would agree with such a differentiation, though indeed with some caveats. The land of ancient Canaan—aka the Promised Land, which the Romans named “Palestina”—is what God showed Moses from atop Mount Nebo (Deuteronomy 34:1-3). In today’s terminology, that would mean that Moses saw all the swaths of land that belong both to the State of Israel and to the Palestinian Authority, the latter of whose land is commonly called the “West Bank” because it is located west of the banks of the Jordan River. In fact, nowadays, if one ventures to the top of Mount Nebo (which is in the country of Jordan) and looks eastward, one can see, in a truly spectacular view, the massive sweeps of land that extend from the Sea of Galilee all the way south to the Dead Sea. Such is the land of which the Lord spoke to Moses: “This is the land of which I swore to Abraham, to Isaac, and to Jacob: ‘I will give it to your descendants.’ I have let you see it with your eyes” (Deuteronomy 34:4).

Some things about this whole discussion should be pointed out. Firstly, many pilgrims identify the “Promised Land” simply with “Israel,” the latter of which they unknowingly associate with modern-day Israel. In so doing, such pilgrims unknowingly overlook the fact that, actually, parts of the land promised by God to the Hebrews consists in territories belonging to current-day Palestine. Hence, I think it best to speak, while on pilgrimage, of either the “Promised Land” or “The Land of Ancient Israel,” rather than calling all of it simply “Israel.” Secondly, moreover, a distinction between “Promised Land” and “Holy Land” indeed should be made, for the “Holy Land” in fact does extend beyond the territories of ancient Canaan, so as to include parts of what is now the country of Jordan, which is located on the eastern side of the Jordan River (hence the country’s name). That this land should be included in the denomination “Holy Land” is seen by, among other things, the fact that, as we read in the Church historian Eusebius, it is thought that the Jewish Christians living in Jerusalem fled the Holy City before Titus burned it, emigrating across the River Jordan to live in Pella, which was part of a region of the Holy Land called the “Transjordan” (because it was “across”—trans, in Latin—the Jordan River).

All the images in this slideshow have been graciously provided by Fr. Samson. 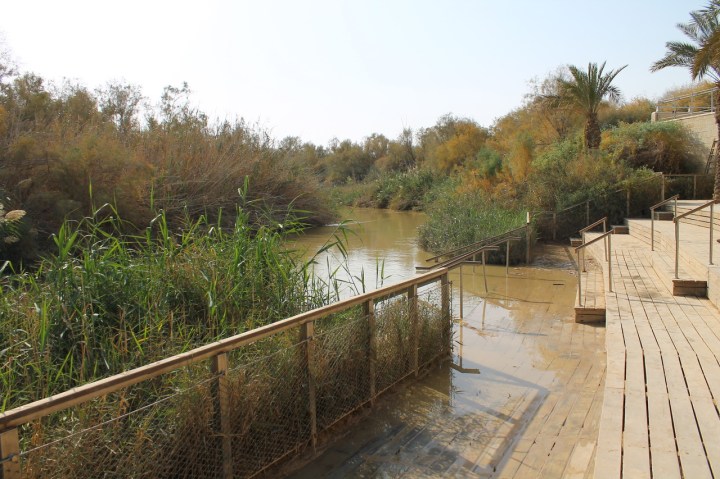 So, to recap, here is what we should take away from this discussion: by “Promised Land,” we should understand the land of ancient Canaan/Roman “Palestina”/current-day State of Israel and Palestine Authority … these three items are more or less synonymous; by “Holy Land,” we should understand the Promised Land and nearby sections of land across the Jordan River and located in what is now the country of Jordan. Such considerations are, indeed, found in my book, which contains also accompanying maps and diagrams explaining how all of the Holy Land was laid-out at the time of Jesus, especially.