C.S. Lewis tells you how to see others 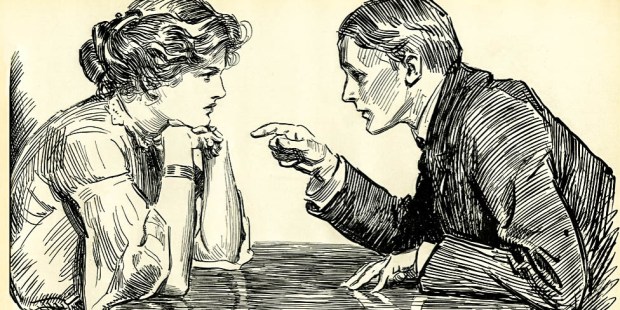 “It is a serious thing to live in a society of possible gods and goddesses.”

My wife quite liked a woman whose conversation affected me like fingernails down a blackboard. My whole body would clench up. The sight of her in the grocery store sent me to hide for 10 minutes in the cheese section in the back and then to creep through the store peering round the corner of each aisle to make sure she wasn’t there. My wife disliked a couple of people I liked a great deal.

Neither of us could understand the other’s feelings. “But X is a great person,” we’d both say, bewildered that our beloved spouse couldn’t see this. A couple of decades later, I have a shrewd idea why we both reacted as we did. The feelings of affection or repulsion came from the differences in our personalities and theirs — rooted, for all I know, in bad childhood experiences or other things hard to overcome.

That, for most of us, is life. You like some people and you dislike others. You adore a few and really don’t like a few. About some you can’t gin up any feelings at all. Even the saintliest people often know one or two people who really get under their skin. You may feel you have no enemies, but these people you will have.

C.S. Lewis has an answer for this.

“The Weight of Glory”

His answer, in short, is to remember exactly who all these people are, especially the ones you dislike. To put it another way, to see them not as they appear to us — as people whose personalities may clash with ours — but as they really are and as they will be.

“At present,” he says, “we are on the outside of the world, the wrong side of the door.” We are not yet what God will make us, but neither is anyone else. That is sometimes very hard to remember about other people, say when you’re hiding in the cheese section.

Lewis explains what he means by “glory” in several carefully argued pages, which I can’t summarize here. I’d urge you to read the sermon, and for that matter the others in the book. Here I want to share what Lewis tells us at the end. This is what we need to see when we look at the person we don’t like and the person for whom we have no feelings. We should see what love sees. Seeing what love sees, we might be able to love that person a bit more, or at least to act as we love him.

Lewis explains that you can’t think too much about your neighbor’s possible future glory. He has an immortal end, and it could be good or bad. “It is a serious thing to live in a society of possible gods and goddesses, to remember that the dullest and most uninteresting person you talk to may one day be a creature which, if you saw it now, you would be strongly tempted to worship, or else a horror and a corruption such as you now meet, if at all, only in a nightmare.”

Read more:
What depression taught me about being a burden — and helping others bear theirs

That difficult person isn’t an annoyance, he’s a future glory or a horror. As are we, and how we treat that person is part of our movement in one direction or the other. “All day long we are, in some degree, helping each other to one or other of these destinations,” Lewis says.

It is in the light of these overwhelming possibilities, it is with the awe and the circumspection proper to them that we should conduct all our dealings with one another, all friendships, all loves, all play, all politics. There are no ordinary people. You have never talked to a mere mortal. Nations, cultures, arts, civilization — these are mortal, and their life is to ours as the life of a gnat. But it is immortals whom we joke with, work with, marry, snub, and exploit — immortal horrors or everlasting splendors.

Lewis explains briefly what this means for the way we relate to others. He then ends the sermon with a kind of summary of Jesus’s parable of the sheep and the goats: “Next to the Blessed Sacrament itself, your neighbor is the holiest object presented to your senses. If he is your Christian neighbor he is holy in almost the same way, for in him also Christ vere latitat — the glorifier and the glorified, Glory Himself, is truly hidden.”

That annoying person over there, he’s Jesus to you — if only you see him as Jesus sees him.

Read more:
Advice from leader of a 900-year-old charity: Try to give of yourself. Life will be better

C.S. Lewis tells you what to read

C. S. Lewis tells you what to do with your life

C.S. Lewis tells you how to observe Lent