Stephen Hawking’s theories and his flirtation with God 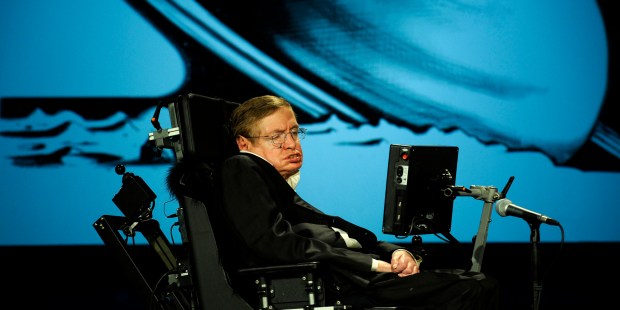 Like many students, the young Stephen Hawking had two traits that might annoy and amuse his professors: he didn’t want to spend a lot of time on his “studies,” and he had a highly ideal spirit.

“At University College, Oxford, he found his studies in mathematics and physics so easy that he rarely consulted a book or took notes. He got by with a thousand hours of work in three years, or one hour a day, he estimated. ‘Nothing seemed worth making an effort for,’ he said,” according to one obituary that appeared Wednesday, the day he died at the age of 76.

The only subject he found worthy of his time was cosmology because, he said, it dealt with “the big question: Where did the universe come from?”

His life was consumed by the pursuit of that question, just as his muscles became consumed by Lou Gehrig’s Disease. He might not have been given the time to discover much of anything, but by some fluke he outlived the early, grim diagnosis of ALS by five decades. The answers he found centered on gravity, the Big Bang Theory, and black holes. And he seemed to have intimations of an answer that went beyond the material reality he studied and speculated about.

The Penrose-Hawking singularity theorems have to do with what happened at the time of the Big Bang. According to the Big Bang Theory, the energy and matter in the universe are more dense the farther back you go in time. At the very beginning, the size of the universe is zero, so the density is infinite.

“This is called a singular point.’ What Penrose and Hawking proved is that under certain assumptions, the universe must have had such an initial singularity,” said Stephen M. Barr, professor of physics and astronomy at the University of Delaware.

However, one of the assumptions of their theorem is that one can use the equations of Einstein’s theory of gravity without taking into account quantum mechanics. Nobody, including Hawking, believes that this is actually the way things were at the time of the Big Bang, Barr explained.

Because when matter and energy are as dense as they would have been in the first moments after the Big Bang, you have to take quantum mechanics into account; you can’t ignore it,” he said. “And it is generally believed by most physicists who think about these kinds of things that if you took quantum mechanics into account the singularity would go away; it would be smoothed over. In physics, when infinite quantities appear in your calculations, it is almost always because you made an unrealistic assumption.

One idea for how the initial singularity got smoothed out by quantum mechanics at the time of the Big Bang is due to Hawking himself and American physicist James B. Hartle: the Hawking-Hartle state.

Hawking Radiation theorizes that contrary to the belief that nothing can escape from black holes, they actually radiate energy. Eventually, a black hole will radiate all its energy and disappear.

“So for example, if I had a black hole sitting there, and I threw something in there, classically it would get swallowed up and get crushed,” Barr said. “The black hole would get more massive—as it gobbles up things it gets more and more mass—and it can’t get rid of that mass or energy. But Hawking said ‘No, quantum mechanics says that this black hole is constantly radiating energy, and it’s shrinking, and eventually it will shrink away to nothing.’”

This led to several puzzles, including the “black hole information paradox.”

“According to quantum mechanics, information about the past is never really lost,” Barr explained. “It may be hidden in a way that you can’t access, but the physical universe, in a sense, always remembers its past in complete detail. If you burn a piece of paper, you might think that all that information written on the paper is gone forever. But it really is all still there in the smoke and ashes, even though in practice we cannot retrieve it.”

Hawking pointed out that black holes seem to violate this because of Hawking Radiation.

“Imagine that you throw something into a black hole, and it’s crushed into oblivion at the center, and then later the black hole evaporates completely into Hawking Radiation,” Barr said. “Calculations seemed to show that the Hawking Radiation does not ‘remember’ anything about the object that was thrown in. It seemed that Hawking had shown that black holes violate one of the basic principles of quantum mechanics. That of course would be an enormously important discovery.

“While the consensus now is that black holes do not destroy information and thus do not violate quantum mechanics, no one really understands how this works in detail. It is very hotly debated, and on the cutting edge of current research on the deepest issues in physics,” Barr concluded.

Aside from these theorems, Hawking seemed to touch ever so slightly on the theological. In his book A Brief History of Time, he said that all that physics does is give you a set of mathematical rules and equations, but it cannot explain why there is an actual universe for those rules and equations to describe.

“What breathes fire into those equations so that there’s an actual universe for them to describe?”

“That, I think, contains very well the argument that you need a Creator,” Barr commented. “The traditional Catholic understanding of creation, held by St. Thomas Aquinas, for instance, is that God is the cause of being. Aquinas said, ‘To all things God is the cause of being.’ As I like to say, God confers on the universe its reality, its actual existence. Physics cannot explain why the universe is real and exists. Physics gives a mathematical description of a universe, but cannot explain why there actually is a universe—a real existing universe—that fits that description. Hawking hit the nail on the head there: physics cannot explain why the universe goes to all the trouble of actually existing.”

Years later, with coauthor Leonard Mlodinow, Hawking wrote The Grand Design. The book, contradicting the earlier insight, claims that the laws of quantum gravity explain the existence of the universe.

“Once you have laws of quantum gravity, they will bring into existence, out of nothing, a universe,” Barr summarized. “There’s a lot philosophically wrong with that. In the first place, one hasn’t explained where these laws come from. But the biggest problem with Hawking’s later view is stated in his earlier book. The laws of quantum gravity are just ‘a set of rules and equations.’ They therefore cannot explain why there is an actual real universe described by those rules and equations.  One can imagine nothing existing that is described by them. Mere equations cannot make anything real.”

Hawking was a professed atheist, though he was a member of the Vatican’s Pontifical Academy of Sciences.

“He was a well-known atheist, despite the fact that it was a miracle that he was able to live so long with such a debilitating disease and carry on a very vibrant life as a physicist,” said Aaron Dominguez, dean of the school of Arts and Sciences at the Catholic University of America. “It was a real gift from God, so it’s a little sad that he didn’t see it that way.”

Dominguez, a particle physicist, had a close encounter with Hawking when he was an undergraduate student at Cal Tech and Hawking was visiting to give lectures in the late 1980s. “I was his waiter at the Faculty Club for a couple of weeks,” Dominguez said in an interview Wednesday. “By that time he was unable to speak on his own. Just seeing him, he looked like a vegetable. But in fact he was a brilliant mind.

“So it’s a real interesting juxtaposition that here’s a person who doesn’t fit most people’s conception of what an able-bodied person would be,” Dominguez continued. “Some people don’t even think such people deserve to be born. And yet he lived a full life and contributed to some of the deepest understandings and discoveries of mankind.”

Said the professor, “I would say that in some ways God was working through him.”