The story of the Irishman who invented the submarine 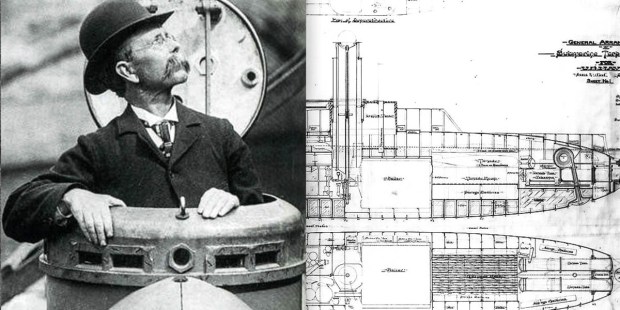 Of course the Irish have composed a drinking song about “the man from Clare.”

Thanks to an imaginative and persistent Irish lad, his supportive science teacher, and an encouraging priest, today we have the modern submarine.

John Philip Holland (Gaelic: Seán Pilib Ó hUallacháin / Ó Maolchalann) (February 24, 1841-August 12, 1914) was born in the coastguard’s cottage in Liscannor, Country Clare, Ireland, the second of four boys. His father, John Sr., worked for the British Coastguard Service, and sadly died during John’s childhood, due to the Irish Potato Famine (1845–1852). Like many other Irish who survived the Great Famine, John developed an antipathy against the British, and subscribed to Irish Republican tendencies.

John only learned English when he began attending the local state school, St. Macreehy’s. In 1853, John’s family moved to Limerick and he entered a Christian Brothers’ school. There he met Brother Dominic Burke, a Limerickman who became his mentor and friend.

The young John’s head seethed with wondrous ideas, and Brother Burke approved of his student’s fantastical designs. Besides designing an airplane, in 1859 the 17-year-old John drew up plans for a submarine.

John Holland joined the Christian Brothers in 1858 and taught throughout the country until 1873, when he left the order due to ill health. While teaching in Cork, Holland read about an American Civil War naval battle between the ironclad ships USS Monitor and CSS Merrimack (or Virginia) in 1862. This was the first battle between ironclad warships, and it transformed naval technology throughout the world.

Holland realized that the best way to attack such ships would be from beneath the waterline. He tried to secure funding to build a submarine, but was rejected as a crazy nationalist fanatic. In 1870, the French Catholic Jules Verne published his famous sci-fi novel, 20,000 Leagues Under The Sea, featuring a submarine, and Holland was spurred onward in his quest to turn fiction into reality.

Holland’s mother and two brothers had emigrated to Boston, so he joined them in the USA. Soon after his arrival, Holland slipped on an icy Boston street and broke a leg. He spent his time in hospital refining his designs, encouraged by the priest Father Isaac Whelan.

After working for a while as an engineer and then teaching again, Holland submitted his submarine design to the U.S. Navy in 1875. The Navy Secretary scornfully rejected it as “a fantastic scheme of a civilian landsman.” However, Holland’s brother Michael had introduced him to the Fenian Brotherhood, the American counterpart to the Irish Republican Brotherhood, and they gave him enough funding to resign his teaching position so that he could concentrate on submarine research and development.

In 1881, the submarine Holland Boat No. II, nicknamed Fenian Ram by a New York Sun reporter, was launched. It was meant to be used against the British, but due to payment disputes, the Fenians stole the submarine and Holland refused to teach them how to operate it.

Finally, on St. Patrick’s Day, 1898, Holland successfully launched the Holland VI off Staten Island, N.Y. Ten days later, he demonstrated the working submarine to the U.S. Navy, and then-Assistant Secretary of the Navy Theodore Roosevelt recommended its purchase. Two years later, on April 11, 1900, the U.S. Navy purchased the submarine from Holland for $150,000 – half the cost of production. It was the first submarine that had enough power to run long-distance underwater for four hours, and the first to combine gasoline engines for use on the surface and electric motors for submerged travel. It was commissioned on October 12, 1900, as the USS Holland. Holland went on to build submarines for the Royal Netherlands Navy, the British Royal Navy and the Imperial Japanese Navy, receiving the Rising Sun from the Emperor of Japan for his contribution to the Japanese Naval victory against Russia in the 1904-5 Russo-Japanese war. The British engaged in acrimonious debate before deciding to get on board with the new technology, with Rear Admiral A. K. Wilson calling the covert warfare “underhand, unfair, and damned UnEnglish.”

John Philip Holland died a few months before the first sinking of a warship by a submarine with a torpedo, at the opening of World War I. He is buried in the Holy Sepulchre Cemetery in Totowa, New Jersey, less than a mile from where he launched his first submersible. Of course, the Irish have composed a drinking song telling of the man from Clare who invented the submarine:

Come all you young Irishmen who walk upon the land,
There are feats indeed, and fairy creeds, that you might understand:
There is one of them that comes to mind, the likes was never seen,
He was John Philip Holland who invented the submarine.

The U.S. Navy thought the man was crazy, they thrun his plan one side,
But Holland paid no heed to them in his boat beneath the tide.
The Fenian Ram of ’eighty-one now by all was seen:
This boat and show could go below, and they called her “the submarine.”

Come all you sailors both young and old and listen unto me:
You’ll go on a boat that will go afloat below under the sea,
Be you Russian, Cuban, Austrian, Australian or Phil-i-apeen,
Raise your glass in the air for the man from Clare who invented the submarine!

(song by Breandán Higgins of Lahinch)