Towards a World Day for Eastern Christians 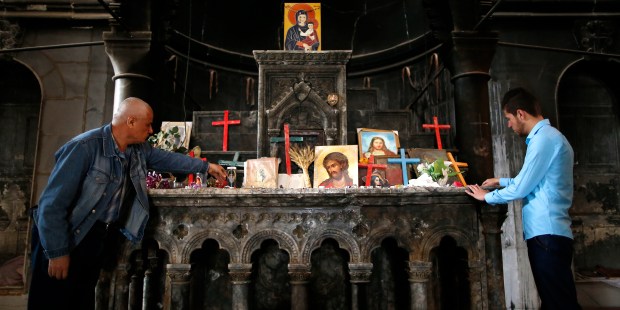 On Palm Sunday, Christians from the West are invited to pray for peace in the Middle East.

A French Christian charity devoted to helping Eastern Christianity has suggested organizing a day dedicated especially to Christians from the Middle East.

The charity, the Oeuvre d′Orient, is inviting all Christians to pray for peace in the Middle East on Palm Sunday, which this year coincides with March 25, the usual date of the Feast of the Annunciation (transferred this year in US dioceses to April 9).

Monsignor Ignatius Joseph III Younan, patriarch of the Syriac Catholic Church of Antioch, says the designation of this World Day on March 25 is “very important for the Christians” of Syria, Lebanon and Iraq, as well as Egypt.

The prelate underlined the joy for the Christian populations of these countries to know that Christians would be praying on this day for “peace to reign over the Middle East.”

For a greater communion among Christians

This initiative by the Oeuvre d′Orient opens the door for the creation of a “World Day for Eastern Christians.” This would, in effect, be the ideal opportunity to share with the largest number of people possible the dramatic situation entire families are having to endure.

March 25, for Christians from the East, placed “under the protection of Mary,” is a feast day in all the regions of the Middle East, a press release from the charity noted.

In fact, while Catholics celebrate the glorious arrival of Christ in Jerusalem, the Orthodox will be commemorating the Annunciation. In Lebanon, March 25 is particularly relevant as the Annunciation, celebrated by all Christians, has officially become the “joint Islamic-Christian national holiday” for the Lebanese from all religions.

In  all the communities that the Orient supports, that is to say, in Iraq, in Syria, in Egypt, in Lebanon, as well as the Holy Land, but also outside of the Middle East, prayer intentions and intercessions will be read.

This day, under the protection of the Virgin Mary, should provide a greater communion and union between Christians worldwide.

What exactly should we do on March 25?

Each individual is invited to participate in this day where our hearts should unite, more profoundly than usual, in the sufferings of the Christian populations of the Middle East. Other than personal prayer, the Oeuvre d′Orient suggests including your parishes in this event. And if there is a community from the Middle East in your neighborhood, knock on their door and get to know them.

The Oeuvre d′Orient was initially founded in 1856 to come to the aid of children from Lebanon. Two years later, the charity was recognized as a Work of the Church by Pope Pius XI. After 160 years of existence, the charity, placed under the protection of the archbishop of Paris, continues today to help Christians from the East.