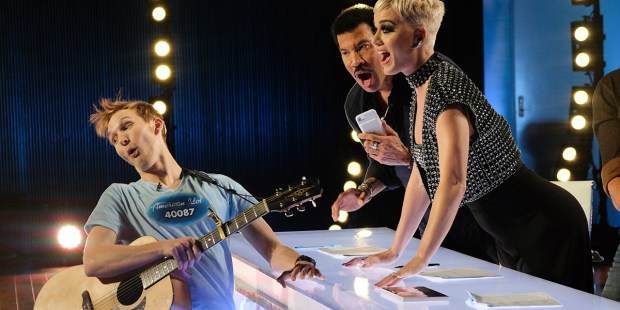 Although the kiss was unwanted, American Idol contestant, Benjamin Glaze, has handled the situation honorably

The internet is all abuzz with the story of Katy Perry stealing a kiss from a young American Idol hopeful named Benjamin Glaze. While many youngsters, and even oldsters, might have appreciated this gesture from a global pop star, Glaze wasn’t so happy. In case you don’t know what led the highly successful Perry to make the move, here’s a quick rundown.

Back in October 2017, 19-year-old Glaze appeared onstage to audition for the popular television show. The cashier from Oklahoma arrived in front of the panel of judges with his guitar in hand, ready to sing “Stadium,” a song he’d written himself. In the pre-performance banter, Judge Perry asked Glaze if he’d ever been kissed — in reference to her own hit, I Kissed a Girl. When Glaze replied he hadn’t, Perry beckoned him over to the judge’s table and went ahead pecked him on the lips. What Perry hadn’t bargained for, nor possibly the audience, was Glaze’s reaction. The teen pulled away from the star saying: “Katy, you didn’t” and went about performing his song, yet without much passion.

Glaze freely admits that he was raised in a conservative family and said to the New York Times that he was a “tad bit uncomfortable” by the surprise kiss, explaining that: “I can’t kiss a girl without being in a relationship.” Although his job gave him the opportunity to meet “cute girls,” he shared that he’d never been in a relationship. He was waiting for that special girl to come along for that first kiss. “I wanted it to be special,” he added.

When the show aired earlier this week, it was revealed that Glaze had been rejected by the judges. And while the whole incident is very unfortunate, Glaze didn’t hold a grudge and remained dignified. He took to Instagram to say there were no hard feelings and that he was “very honored and thankful to have been apart of American Idol,“adding: “My main goal is to reach people through the universal love of music and not cause strife or anger against anyone or about any situation!”

His behavior is impressive in a myriad of other ways: Not only did he have no qualms in sharing on a popular national television show that he had never kissed a girl, a rarity among most 19-year-olds, he was also extremely pragmatic about the whole event, explaining that more people are viewing his music. Yet, what the songster may not realize is that he has also unwittingly become a champion for saving that first kiss for, in his own words, “a romantic situation with someone you care about. That’s what a real first kiss is.”

Read more:
Nuns Fight To Keep Their Convent Out Of Katy Perry’s Hands