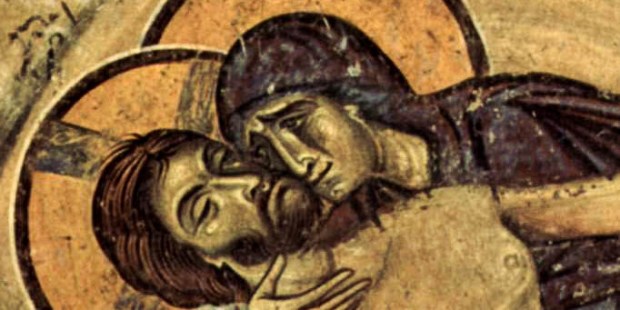 Public Domain
"The death of the Lord our God should not be a cause of shame for us; rather, it should be our greatest hope, our greatest glory. In taking upon himself the death that he found in us, he has most faithfully promised to give us life in him, such as we cannot have of ourselves."

These holy men and women were forever changed by what they saw on Good Friday.

While many present at Jesus’ crucifixion were part of the crowd who put him to death, there were several men and women who were fundamentally changed after encountering the suffering Christ.

Some are mentioned by name in the Bible, but others are spoken of only in reference to what they did or said on that day. Of these, various traditions continue their story and explain how they led a saintly life and are now venerated as “saints.”

Here are five familiar characters from the Passion narrative who became disciples of Christ after witnessing his passion.

By tradition, she is known as the woman who wiped Jesus’ face as he was led to Calvary. Various legends explain where she went afterwards, all of which regard her as a holy woman. There are also relics that claim to be Veronica’s veil, bearing a miraculous image of Christ on it. (The name Veronica comes from the Latin/Greek phrase vera icon, “true image.”) One of these relics is kept in St. Peter’s Basilica in Rome and is often displayed on the 5th Sunday of Lent. Her feast day is July 12.

It is believed that Simon, at first a reluctant bystander when he was pressed into service to help Jesus carry his burden, became a changed man after bearing the wood of the cross and gazing into the eyes of the suffering Jesus. Little is known of what happened to Simon after the crucifixion, but tradition says that he and his sons became faithful disciples. This is deduced from the fact that Mark mentions the sons, Alexander and Rufus, by name (Mark 15:21), which seems to indicate that they were known figures in the early Church.  His feast day is December 1.

Only mentioned in the Gospel of Luke, the “good thief” defended Jesus on the cross from the mockery of the other thief. Jesus saw the faith and repentance of the thief and boldly proclaimed, “Truly, I say to you, today you will be with me in Paradise” (Luke 23:43). Based on this statement of Jesus, the early Church recognized he was in heaven and therefore, a saint. Unnamed in the Gospel, he is given the name Dismas in an apocryphal account. His feast day is March 25, which was considered the traditional date of the crucifixion.

After Jesus expired on the cross, a centurion pierced the side of Jesus and blood and water flowed out. It is believed that at that moment he became a faithful Christian. He is recorded in Mark as saying, “Truly this man was the Son of God!” (Mark 15:39) His name is not mentioned in Scripture, but he was given the name Longinus in later accounts. Various legends surround his life and some believe he was martyred by order of Pontius Pilate. His feast day is March 15.

A wealthy man of Israel, he provided his own prepared tomb for Jesus’ body. The tomb became the site of Jesus’ resurrection. It is recorded in John that he was, “a disciple of Jesus, but secretly, for fear of the Jews” (John 19:38). Some traditions claim he traveled to Britain with the Holy Grail and founded a monastery at Glastonbury. His feast day is March 17.

Read more:
These artifacts are said to be the relics of Christ

Read more:
What happened to the True Cross of Christ?