Padre Pio and the popes 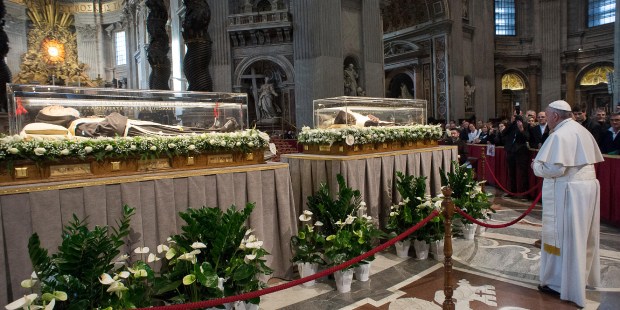 Pope Francis’ visit to St. Pio of Pietrelcina’s hometown continues the extraordinary relationship between many pontiffs and the beloved friar.

On Saturday, March 17, Pope Francis will be visiting the Italian towns of Pietrelcina and San Giovanni Rotondo, following in the footsteps of Padre Pio, and marking the centenary of the first appearance of the friar’s stigmata, and the 50th anniversary of his death.

The papal visit is all too fitting for this beloved saint who was both devoted and obedient to Peter’s Successors throughout his life.

Although the pontiffs held the Capuchin in high esteem as well, there were a few hurdles along the way.

As soon as he entered religious orders, Padre Pio (1887-1968) showed his devotion toward the person of the pope in his choice of name. On the day of his investiture, in 1909, in the Order of Friars Minor Capuchin, Francesco Forgione took the name Pius – Pio in Italian – in homage to Saint Pope Pius V (1566-1572), who had consecrated his pontificate to the application of the Catholic Reform defined by the Council of Trent.

Further respect Padre Pio paid to the Bishops of Rome can equally be found in a letter sent to Pope Paul VI (1963-1978), on September 12, 1968: “I offer you my prayers and daily sufferings as a small but sincere contribution on the part of the least of your sons in order that God may give you comfort with his Grace to follow the straight and painful way in the defense of eternal truth.”

In the letter Padre Pio went on to reaffirm his faith and his “unconditional obedience” to the pontiff’s “illuminated directives” during a tumultuous period in the heart of the Church.

Other popes were also the subject of his admiration, including Saint Pius X (1903-1914). Even before this pope’s death, Padre Pio referred to him as a “true saint, the true image of Our Lord.” And his devotion to Pius XII can be noted when the Capuchin asked a priest who was going to Rome to pass on the message: “Say to his Holiness that I offer my life for his, with a heart full of joy.”

Relations with the Holy See were not always so easy

However, relationships between Pio and the Vatican were not always so simple, due to the number of spiritual phenomena that surrounded Padre Pio – stigmata in particular– that could justify, at first sight, a certain degree of wariness. Faced with the sometimes excessive veneration shown Pio by certain faithful, the Holy Office forced the friar to cease all public activity and to celebrate Mass in private, shut away in his friary.

Even if this ban was lifted by Pius XI in 1933, the suspicions didn’t wear off. Nearly three decades later, in 1960, Pope John XXIII ordered a thorough investigation of the Capuchin, resulting in the Holy Office limiting his public appearances once more. It was only in 1964 that Padre Pio was able to say Mass without any restriction, at the request of Pope Paul VI. The Capuchin Antonio Belpiede, the current general procurator of the Order of the Capuchins, recently reported that “John XXIII had been ill-informed” in the matter.

Read more:
“Padre Pio is often with me during exorcisms, and the devil fears him”

Although he aroused certain suspicions among some popes, Padre Pio was however admired by Pope John Paul II (1978-2005). In 1947, Karol Wojtyła, still a young priest, visited San Giovanni Rotondo, where he met the friar who then heard his confession. During the meeting it is said that Pio predicted his election to the Holy See: “You will be pope but there will be blood and violence.” At the same time, Padre Pio also confided in the future Polish pope the existence of an extremely painful portion of the stigmata, which nobody had been aware of: the shoulder wound of Christ, caused by the weight of the Cross.

Read more:
Padre Pio, Bernard of Clairvaux and the Shoulder Wound of Christ

A few years later, in 1962, Karol Wojtyła asked the friar to pray for one of his closest friends, Wanda Poltawska. Suffering from cancer, this Polish mother of four was miraculously healed thanks to the intercession of Padre Pio. On June 16, 2002, she participated in the canonization of Saint Pio de Pietrelcina, celebrated by John Paul II.

Pope Benedict XVI (2005-2013) in turn made a pilgrimage in June 2009 to San Giovanni Rotondo, to pay homage to the Capuchin friar. The pope emeritus drew parallels between the Curé d’Ars, St. John Vianney, and Padre Pio, two saintly figures whose lives had been centered on prayer, the Eucharist, and confession.

Finally, before becoming pope, Cardinal Jorge Mario Bergoglio already showed a certain attachment toward Padre Pio. In 2004, during a meeting with Father Marciano Morra, a Capuchin, the Argentinian archbishop was struck by the “social action that Padre had given to the town  (…) with the construction of the Casa Sollevio della Sofferenza (House of Relief of Suffering).” During his visit on March 17, Pope Francis will notably pay a visit to this unconventional hospital.

Pope Francis made the Italian religious one of the patrons of the Extraordinary Jubilee of Mercy, without doubt because of his extraordinary charisma as confessor, celebrated throughout Italy and the rest of the world. This is the reason for which, exceptionally, the remains of Padre Pio were transfered to Rome between the 5 and 11 of February, 2016, and exhibited for the veneration of the faithful in Saint Peter’s Basilica.

Read more:
This is how Padre Pio died, according to nurse who was with him