Being without sin didn’t make Mary without personality 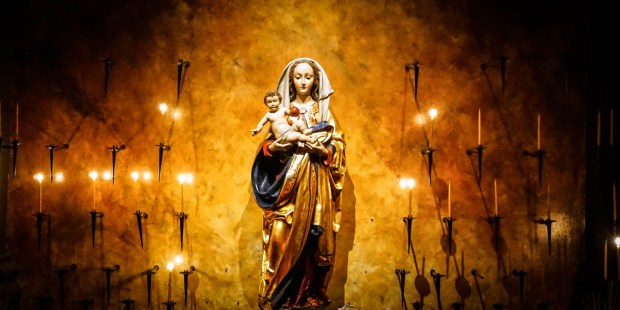 Their marriage required learning how to communicate, just as ours do.

It’s a remarkable title for a girl from a nowhere village: Queen of the Universe. Of course, she’s also called the Mother of God and the Mediatrix of All graces, having been given a crown of stars and a throne in heaven. She’s the Queen of Apostles and Martyrs, the Spouse of the Holy Spirit, the Ark of the Covenant, the Gate of Heaven.

And she’s Joseph of Nazareth’s wife.

Sometimes when we think about Mary, we’re so drawn to incredible heavenly realities or dramatic earthly moments that we forget that Mary lived most of her life as we do. She wasn’t always chatting with angels or contemplating the broken body of God incarnate.

For most of her life, Mary was, to all appearances, an ordinary wife and mother.

We often ignore Mary’s relationship with Joseph, uncomfortable as we are with the idea of a virginal marriage. We think of Mary as Virgin and Mother, with Joseph silent in the workshop next door. But meditating on what their marriage might have looked like can give us a better sense of how our relationships ought to be.

There’s an old joke to the effect that any time something went wrong in the holy house at Nazareth, it had to be Joseph’s fault, he being the only sinner in the family. But being without sin didn’t make Mary without personality. She and Joseph still had to learn how to communicate. They still had to compromise. They still had to take risks and be vulnerable.

When Mary realized that her son was the Suffering Servant of Isaiah, that he would suffer death for his people, she had to decide if she would tell Joseph, and when. When she was caught up in memories of the flight into Egypt or pained at the thought of the sorrow to come, she had to choose to invite her husband into her suffering to bear it along with her.

There must have been laughter, too. Shared moments of joy. Winter nights reminiscing and keeping each other company. Evenings her boys were out later than she expected and she sat home worrying, and the relief when they finally came home.

In Mary’s sinless life, there was no rage, but there may well have been righteous anger, at the way other children treated her son, perhaps, or the gossip of a small town. There were hard conversations and probably even times when the marriage felt strained.

For years and years, she hung laundry to dry, this woman before whom kings would bow and angels tremble. When dishes needed to be done or gardens weeded, she didn’t lament that she might have been a queen, she to whom Gabriel himself had paid homage. She did the work of the day well. She did the next right thing.

There isn’t much time in the Church calendar allotted for contemplating the hidden life at Nazareth. Today, as we approach the feast of St. Joseph, let’s take some time to ask the Lord how our lives can better image the lives of the Holy Family. Mary, Queen of the Universe and Wife of a Carpenter, pray for us.

Read more:
How half a dozen recent popes have called us to learn from St. Joseph