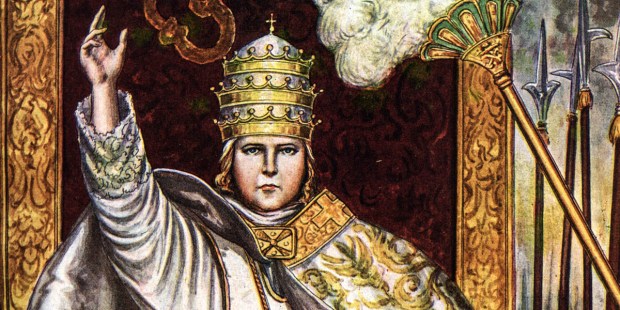 Episode 2 covers some of the Church’s worst moments from a secular point of view.

So, you want to play a drinking game, but you would like to avoid becoming inebriated? Try this: watch CNN’s documentary series Pope: The Most Powerful Man in History and take a drink every time an actual Catholic is interviewed. Chances are you probably won’t get through even half a glass of your favorite adult beverage. As in the series’ first episode, Catholic voices are few and far between. This time around, we are treated to a few lines from the Vatican’s Secretary of the Pontifical Council for Culture, Bishop Paul Tighe, as well as some comments from respected Catholic historian Professor Eamon Duffy.

Actually, Duffy’s inclusion is something of a welcome surprise, as the award-winning author often bucks the conventional wisdom of the academic community regarding the Reformation era. In meticulously researched books such as The Stripping of the Altars and The Voices of Morebath, Duffy makes a convincing case that the Church of the Middle Ages was not as depraved and hated as so many claim it was, but rather a thriving and much-cherished institution. However, if you count yourself among those who believe Duffy’s views are “revisionist” in nature, don’t fret. The opposing viewpoint that medieval Catholicism was nothing more than a cesspool of murder, greed, and rampant militarism is more than amply represented.

Titled The Resignation of Benedict XVI, Episode Two of Pope: The Most Powerful Man in History covers some of those moments throughout the last two thousand years in which the Chair of St. Peter has been surrendered, voluntarily or not, before the occupant’s death. It’s an admittedly interesting subtopic in the history of the papacy, one that allows the producers of the show to highlight quite a few of the Church’s worst moments.

Oddly enough, the show passes over St. Pontian, the first pope to resign from office. Exiled to the salt mines of Sardinia by Emperor Maximinus Thrax, Pontian forfeited his title on September 28, 235, so the Church could elect a new pope and move on. Likewise, the show also makes no mention of St. Silverius or St. Martin I, though perhaps they don’t count as they were forcefully deposed.

Instead, the show skips directly to the much-reviled papacy of Pope Benedict IX, whom even the Catholic Encyclopedia calls a disgrace. Among his many transgressions, Benedict IX accepted payment in exchange for vacating his position, for a short time anyway. Benedict IX would return twice to the role of Supreme Pontiff, each time ending in chaos and shame. Though the show neglects to mention it, Benedict IX eventually repented of his evil ways and died as a monk in the Abbey of Grottaferrata.

The narrative then spends a few brief moments with St. Celestine V, who never wanted to be pope and gladly resigned when it became clear his lack of administrative skills was an impediment to the Church. Celestine’s resignation was peaceful, but his successor Boniface VIII still had him confined in a monastery for the rest of his life so as to avoid any confusion about just who was pope.

From there, the show moves on to the Western Schism, that period between 1378 to 1417 in which no less than three men laid claim to the title of pope. It was a tumultuous time for the Church, with the papacy being shuttled back and forth between Rome and Avignon in France. The series presents a fair enough CliffsNotes version of the events, but further research is recommended for those interested. The main takeaway is that there have been times when it wasn’t so clear to the faithful just who held the title of Vicar of Christ.

A number of the historical experts on display in the episode suggest that the events surrounding these papal resignations somehow make a mockery of the papacy and weaken any spiritual or moral authority the office holds. That is perhaps a bit of hyperbole. There is no denying that the wrong man on the Throne of Peter can be a public relations nightmare or, worse, be a detriment to the faith of millions. But when all is said and done, not even the lousiest pope has ever changed a single dogmatic teaching of the Church, because God said he can’t, and the Church continues its long march through history, because God said it will. If any of the experts pointed out those two facts, the producers of the show forgot to put them in.

With Episode Two, Pope: The Most Powerful Man in History continues to be a mixed bag. It functions as a decent enough introduction to different periods in the history of the papacy while unfortunately leaning heavily towards those moments which cast the Church in a negative light. Whether that is due to intentional bias or simply because bad news makes better TV, who can say?