Pope on aborting the disabled: Like the Spartans but with more cruelty and science 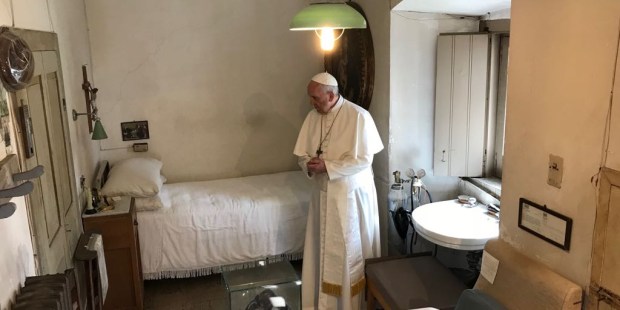 Pope Francis spoke today in the city of Padre Pio about finding Jesus in those who are sick or needy.

During his homily at the Church of St. Pio in San Giovanni Rotondo, the Holy Father asked, “Do we know how to look for God where He is?”

Then he said that in the town there is a “special shrine where He is present,” which St. Pio called “a temple of prayer and science”: the House of Relief of Suffering, the hospital founded by the saint.

“In the sick one finds Jesus, and in the loving care of those tending to the wounds of the neighbour there is the way to meet Jesus,” the pope said. “Those who take care of the little ones are on the side of God and defeat the culture of waste, which, on the contrary, prefers the powerful and deems the poor useless.”

The pope said that those who “prefer the little ones” proclaim a “prophecy of life against the prophets of death of all time, even today, who discard people, discard children, the elderly, because they are not needed.”

Read more:
Pope Francis encourages spiritual discernment that frees a person from the “culture of death”

The pope then recalled when he was a child at school learning about the Spartans. “They taught us the history of the Spartans. I was always struck by what the teacher told us: that when a baby with malformations was born, they took him to the top of the mountain and threw him down, so that these little ones would not exist. We children said: ‘But what cruelty!'”

“Brothers and sisters,” the pope continued, “we do the same, with more cruelty, with more science. What is not needed, what is not productive must be discarded. This is the culture of waste: the little ones are not wanted today. And this is why Jesus is set aside.”