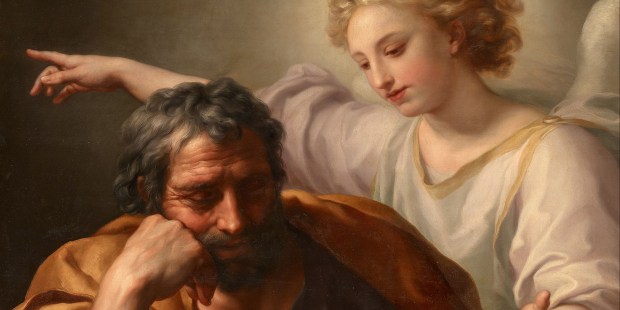 When I have a problem, a difficulty, I write a little note and I put it underneath St. Joseph

Five years ago, on the Solemnity of St Joseph, Pope Francis celebrated the Mass inaugurating his Petrine ministry. He chose March 19 precisely he has always seen in in St Joseph the strength and the wisdom of God.

Pope Francis in his own words on St Joseph:

19 March 2013: Homily during the Mass inaugurating his Petrine ministry

Joseph is a “protector” because he is able to hear God’s voice and be guided by his will; and for this reason he is all the more sensitive to the persons entrusted to his safekeeping. He can look at things realistically, he is in touch with his surroundings, he can make truly wise decisions. In him, dear friends, we learn how to respond to God’s call, readily and willingly.

Here I would add one more thing: caring, protecting, demands goodness, it calls for a certain tenderness. In the Gospels, St. Joseph appears as a strong and courageous man, a working man, yet in his heart we see great tenderness, which is not the virtue of the weak but rather a sign of strength of spirit and a capacity for concern, for compassion, for genuine openness to others, for love. We must not be afraid of goodness, of tenderness!

Read more:
How to pray the Rosary of St. Joseph

16 January 2015: Discourse to families in Manila

I have great love for St. Joseph, because he is a man of silence and strength. On my table I have an image of St. Joseph sleeping. Even when he is asleep, he is taking care of the Church! Yes! We know that he can do that. So when I have a problem, a difficulty, I write a little note and I put it underneath St. Joseph, so that he can dream about it! In other words I tell him: pray for this problem!

Next, rising with Jesus and Mary. Those precious moments of repose, of resting with the Lord in prayer, are moments we might wish to prolong. But like Saint Joseph, once we have heard God’s voice, we must rise from our slumber; we must get up and act (cf. Rom 13:11). In our families, we have to get up and act! Faith does not remove us from the world, but draws us more deeply into it.

Read more:
This prayer to St. Joseph can help you prepare for confession

Today I would like to ask that St Joseph grant all of us the ability to dream because when we dream great things, good things, we draw near to God’s dream, what God dreams about us. That he might give to those who are young people — because he was young — the ability to dream, to take risks and to take on the difficult tasks seen in their dreams. And that he might give to all the fidelity that generally matures in upright behavior, since he was just, which grows in silence—in few words–and grows in that tenderness which is capable of safeguarding one’s own weaknesses and those of others.

Read more:
How half a dozen recent popes have called us to learn from St. Joseph