Refugees may be the real winners of Vatican hacking competition 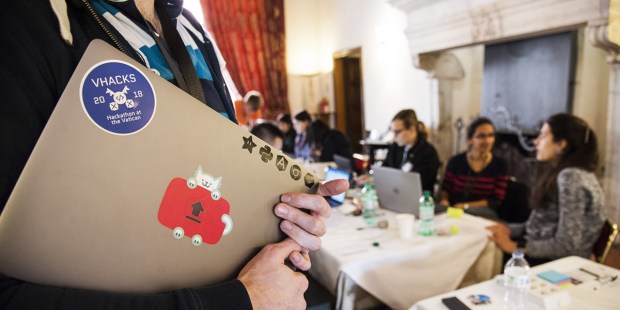 The world has been hearing a lot about refugees over the past few years. The U.N. High Commission for Refugees reports that there are a record 65.6 million forcibly displaced people worldwide. Most are escaping wars, and many are fleeing areas where severe drought conditions threatens famine.

Those with no first-hand knowledge of refugees can only imagine what difficulties come with being uprooted from one’s homeland and trying to make one’s way in a new country.

Several students from Georgetown University went beyond imagining. In the midst of a 36-hour “hacking” competition at the Vatican last week, the four students focused their attention on one aspect of a refugee’s plight and developed a technological way to help such a person overcome that problem.

The first-ever “hackathon” at the Vatican, brought 120 students from 30 countries to a brainstorming competition in a hotel near Vatican City. They put their skills in business, design, engineering and technology to work to address issues of social inclusion, interfaith dialogue and the challenges facing migrants and refugees.

The award ceremony was held at Borgo Santo Spirito, headquarters of the Society of Jesus. The next day Pope Francis welcomed the hackers in his Angelus address. “Dear young people, it is a beautiful thing to put the intelligence that God has given us to the service of truth and to the needy,” the pontiff said.

As Georgetown described it, the app offers a place for refugees to input their often short-term employment, income and payment histories since they’ve been in their host country. Credit/Ability then uses the information to compute a “credibility score.” If the score is high enough, Credit/Ability works with organizational backers to provide a lease guarantee that puts refugees on the same footing as others looking for long-term housing.

Obus said the team made a deliberate decision to build something that was “feasible, viable, and sustainable, that might not be flashy but hopefully adopted by a faith-based institution or small NGO.”

She said the idea developed after meeting resilient refugees at the Sacred Heart Basilica Community Center in Rome. The team probed the experiences of refugees, who often find it hard to obtain leases for long-term housing due to their perceived lack of financial credit, even if they are able to earn basic income and afford rent in their host countries.

“We realized that many potential landlords had negative views of refugees even if they were perfectly able to afford housing,” Shekhar, who is studying for a master’s degree in international development at Georgetown, told the Straits Times.

The group worked under the guidance of their mentor, Gege Gatt, CEO of tech start-up Ebo, to create the app.

The winners in the other two categories were the University of Calgary, which attempted to foster interfaith dialogue through a social network called DUO Collegare (DUO being an acronym for “do unto others”). Organizations can tap into volunteer networks of any church or organization, syncing up potential volunteers with jobs that suit their personal preferences, explained the tech journal Wired.

VHacks organizers have set up a post-hackathon support program for the participants. “Two weeks from now, we will collect more comprehensive presentations about the projects and submit them to our partners and mentors,” Jakub Florkiewicz, one of VHack’s organizers, told Wired. “Selected partner organizations, like Google, Salesforce, and TIM [Vivendi], will revise the projects with the aim of accepting a few ideas into their incubation and acceleration programs.”

And, the magazine noted, there’s already some interest from the Section for Migrants and Refugees of the Holy See. “They’re very interested in further cooperation with a few selected ideas in that field, to help the ventures come to life,” Florkiewicz said.

“We are really proud of the product and excited by the potential it has moving forward,” Obus said of Credit/Ability. “Our team is regrouping to think about how to leverage the prize money and interest from outside partners to build it into something real.”

Several technology corporations have approached the team, expressing interest in implementing the app. The team is currently looking into how it can work with these companies to make the app a reality.