Picturing the Passion: “Christ Carrying the Cross” by Hieronymus Bosch

The image of Jesus remains calm amidst the sneering, scowling figures around him.

The scariest monsters are the ones that lurk within our souls. – Edgar Allan Poe

Hieronymus Bosch (1515–1516), a Dutch painter, was born in the mid-1400s in the southern Netherlands. As a man of his times he attributed all human behavior to either good or evil, God or the Devil. In his paintings he often captured the monsters within man and presented them with flashing fantasy — a fantasy so real that it provoked the viewer’s heart to an intimate awareness of one’s scandalized self. Bosch painted man as he appeared from the inside and not merely at face value. 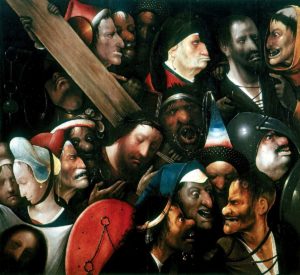 One of his most celebrated paintings is that of “Christ Carrying the Cross.” Bosch executed it a year before his death. Through this deeply contemplative image Bosch invites us to journey inwards, to shake our rigid hearts and to identify ourselves with Christ and His Passion. 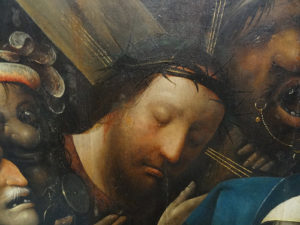 At once we confront a landscape of faces. According to the symbol system of physiognomy, the face is said to be the window to the soul. A beautiful face meant a pure soul while an ugly visage was equated with sin and deviance.

As we examine the painting, we notice at the center lies the peaceful face of Jesus. He is lost in a tangle of scowling, grinning, leering, grotesque caricatured heads. Each possesses a bizarre personality and emotion. As we analye the painting, let’s journey through this creation of cruelty and cynicism. 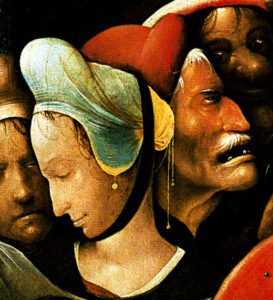 We begin from the bottom left. Beams of unrealistic and artificial light flood in, illuminating the image of a fair young maiden. Subtly smiling to herself, she holds in her hand a veil on which is imprinted the visage of Christ as the Man of Sorrows. She represents the legendary apocryphal figure of St. Veronica, who bravely offered to wipe Christ’s brow on His way to Calvary. Her reward was the “veronica” or vera icon, the “true picture” of the Savior’s face on her veil. 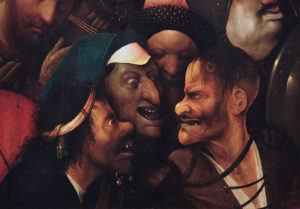 Next to Veronica at the bottom right corner of the painting is a throng of grinning figures. Nightmarish, the trio seem to corner and mock at the snarling snaggle-toothed man. He symbolizes the impenitent thief. Their unkempt, greasy looks reveal their sinister traits. 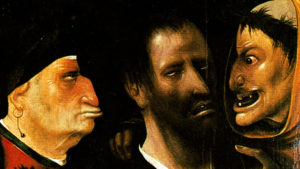 The penitent thief is depicted at the top right end. He rolls his eyes at the tonsured monk who seems to be giving advice to the captive. The friar appears as a hideous person full of self-importance. 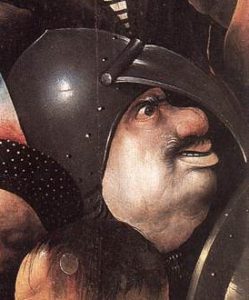 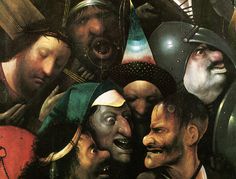 Right behind him stands the most mysterious figure. Sporting a conical wizard-like hat, he seems to have just popped out of the Harry Potter series. With his eyes closed, he wears a wicked smile. Perhaps he is casting a sinful spell that would contribute to the fall of man. Besides his enchanted hat we encounter yet another beastly character. His howls pierce the cacophony of the crowd. 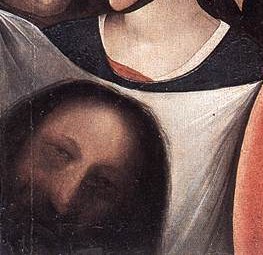 In the midst of this murky mayhem is the solemn face of Jesus silently carrying His cross. He seems unperturbed by the madness of the ugly carnal world. He is beyond the mob, withdrawn to a higher sphere. Interestingly, the calmness of Christ is reflected on no other figure except Veronica. Christ with his closed eyes is placed on a diagonal with her veil. The image on the veil is the only face in the painting that gazes directly at us, almost urging us to choose between good and evil.

On that day, as Veronica dodged her way to Christ in the maelstrom of malice, she received not just the shadow of peace but the Prince of Peace Himself, and through Him she gained everlasting life!