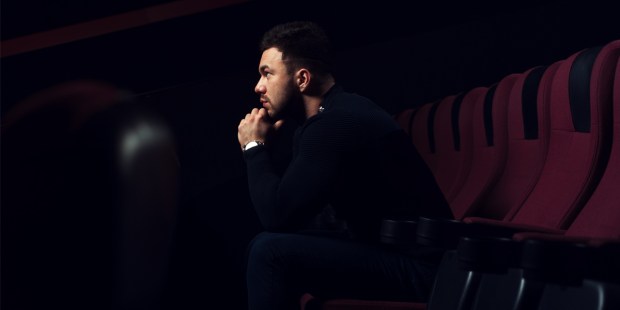 A father learns everything he needs to know while watching ‘The Passion of the Christ’ with his suffering son.

As a homily goes, it was painful. And sublime.

But our deacon always delivers.

A great bear of man with a trimmed grey beard and bald pate, Deacon Rick has a smile that can light up a room. Without a hint of guile, his greeting will warm the most prim of church ladies and his laugh will thunder across the narthex. A native Wisconsin farm boy and ardent Packer fan, he can disarm with tales of early morning milkings and his mother’s incomparable Sunday dinners. He can also move the most diehard (and long-suffering) Vikings fan to a grudging appreciation of the merits of Aaron Rodgers. And for me? Rick’s voice was an even one that eased my Protestant mind years ago about becoming Catholic and made my smiling daughters blush as he complimented them on their beautiful shoes Sunday after Sunday.

And so, last Sunday when the deacon approached the pulpit to offer his thoughts on the Gospel, we gathered faithful settled in our pews awaiting an opening insight or corny joke. But instead, Rick told a story. It was a story of his troubled son. Devastated in high school by the suicide of his best friend, Rick’s son had became morose, withdrawn, lost. Drawing him out was difficult and not fully understanding just what was transpiring deep in his anguished mind caused Rick the aching despair of helpless father. “Where was God in my boy’s life?” the deacon seemed to ask. “Did my son believe, sense, know this God so familiar with pain, so intent on healing?” As years would pass, Rick’s son would become a young man and find himself a devoted parent in a complicated relationship. And one particularly troubled night of another argument between his son and the mother of his son’s child, Deacon Rick, concerned father, said, “Let’s go to the movie.”

Now, this happened years ago when Mel Gibson’s The Passion of the Christ was playing at the theater. Father and son bought tickets and settled deep into their cushioned chairs. And in that dark theater with a screen showing the taunting, the brutal scourging, the thorny crowning of God-made-man, Rick looked over at his own suffering son and wondered, “Does he see this? This God who suffered? Does my son know him and how much God loves him in his own brokenness?”

But then, a most poignant scene (with a touch of literary license) came on. The bloodied, broken Christ fell under the weight of the cross he was carrying. His mother (seeing visions of her boy falling as a toddler) rushed to him frantically whispering, “I’m here!” Her son, the Christ, disfigured and swollen leveled his gaze at her and stammered, “See, Mother, I make all things new.” And Rick looked over at his own broken boy in that dark theater and saw that his head was down and his hunched shoulders were shaking. He was weeping.

Rick was sure. His son does know this God.

The sanctuary was silent as Deacon Rick stepped away from the pulpit. As he headed back to his chair, he turned toward the altar and bowed. And in that bow, I saw a deeply personal moment. His brow was furrowed, his eyes moist with tears, and a pained expression on his face. It was not a moment for me or others gathered in the sanctuary. No. In that moment — in that deeply-lined grimace of a father’s anguished love for his son — this story was more than a message for us parishioners. It was purely between Rick and his Christ. It was an offering to God.

See … I make all things new.