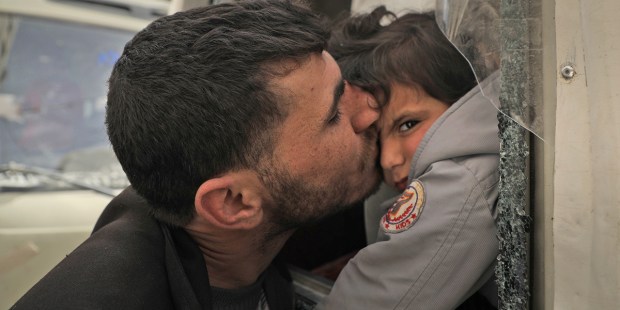 The White Helmets rescue force, which helps remove people from rubble left in the wake of bombardment, are still searching for survivors of a deadly airstrike in Ghouta, Syria. The bombs claimed the lives of 15 children and two women who were seeking shelter in the basement of a school. Leader of the Britain-based monitor, Rami Abdel Rahman, described the attack:

“Three missiles from a single airstrike hit the school, where the underground level was being used as a shelter.”

The National Coalition for Syrian Revolutionary and Opposition Forces, who oppose the government, claim the air strike was targeted at the shelter with the intention of killing civilians. They posted photos on Twitter showing damage to the building and claimed the rocket penetrated three floors in order to detonate in the basement.

Russian authorities have said they are helping the Syrian government “finish off” the rebels in Ghouta, but have denied involvement in this strike.

The Syrian suburb of Ghouta has been under siege for over a month by government forces who are attempting to quell a revolutionary movement. The offensive launched by the government, and aided by Russian forces, has seen the deaths of 1,500 since February, making it one of the most deadly efforts in the last seven years. The unrest in the area has led to a mass exodus of some 50,000 civilians, 70% of whom are women and children.

Some residents of Ghouta told the Telegraph that rebel forces had prevented them from leaving through government mandated “humanitarian” corridors, while others fear reprisal from the government itself. Fearing the safety of escape routes, some 300,000 people have remained in the war-torn area.

UN Human rights cheif, Zeid Ra’ad al-Hussein, was scheduled to address the situation to a formal meeting of the Security Council, but was blocked by a Russian procedural maneuver. Instead he gave his speech to an informal meeting, decrying the “mind-numbing crimes.”

“The siege of eastern Ghouta by the Syrian government forces, half a decade long, has involved pervasive war crimes, the use of chemical weaponry, enforced starvation as a weapon of warfare, and the denial of essential and life-saving aid,” he said.