A Holocaust love story … and an incredible rediscovery 39 years later 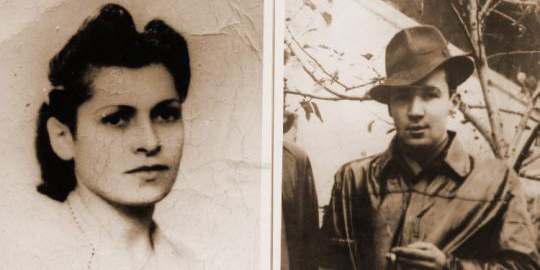 Jerzy and Cyla fell in love behind the barbed wire of Auschwitz and then managed to escape.

Jerzy, 62, was waiting impatiently at Krakow airport for the plane from New York to land. Cyla, his “little Cyla,” was traveling on this plane. He was holding a bouquet of 39 roses, one for each year of their separation. Flashback: Winter 1943. Jerzy met Cyla for the first time in a grain silo at Auschwitz. He had been a prisoner in the camp since 1940 for being part of the Polish resistance.

“From the first moment, I fell in love with her femininity, her smile, her face … ” says Jerzy in an interview he gave with Cyla on a Polish radio station. “Paradoxically, I lived the best days of my life while death was all around me.”

Jerzy Bielecki remembers very well the precise moment when he saw the arrival of a group of a dozen young Jewish girls to the grain silo. All of them were brunette and smiling; they looked a bit amused. They were surprisingly neat in such a place: they wore white aprons on rather clean blouses, with scarves tied in their hair.

“Stupefied, I backtracked when I saw them. Women? Right here? I did not realize what was going to happen at that moment. One of the girls smiled at me and winked. I blushed like a kid.”

Cyla Cybulska came from a small village in eastern Poland. She arrived at the camp in January 1943 with all her family — her parents, her little sister and her two brothers. She is the only one who survived.

Read more:
How one dad made sure his daughter knew his love … long after he was dead

“We were about fifty prisoners with German supervisors in a building near the silo. It was incredible luck. We slept in a relatively dry cellar on straw mattresses,” Cyla says. “We had to wash in the morning and in the evening — it was required for our work of mending flour bags for the camp grain silo.”

It was here that Cyla fell in love with Jerzy, a young Catholic Polish man, one of the first prisoners of Auschwitz. Jerzy was arrested while attempting to cross Hungary to join the French army. Their love was ignited. They managed to talk to each other during meals at the factory thanks to the indulgence of bribed guards.

“I was crazy about her. I saw that she, for her part, was not insensitive to my advances. We were like teens on a park bench stealing kisses as death rumbled around us.”

“Cyla, I’ll get you out of this hell”

One day, Cyla came crying to Jerzy. Her best friend had just been shot by an SS. He pulled the trigger while aiming at her neck, just like that, for no reason. “Don’t cry, Cyla. I’ll get you out of this hell,” Jerzy promised, and he immediately began making preparations for their escape.

“It was like something clicked. I would not have had the courage to do it for myself. I knew how the escape attempts ended. But for Cyla and for our love I was ready to do anything, even the impossible.”

He asked a friend to get him a German uniform; he received it in pieces. Then he managed to get a pass, thanks to his relatively privileged position as a German-speaking prisoner. But when his escape plan was ready, in May 1944, the girls stopped coming to work at the silo overnight. He did not know if Cyla was still alive.

A few months later, he received a note. “Jurek (diminutive Jerzy in Polish), darling, I work in the laundry. Try to find me.” They got to see each other again. And on July 20, 1944, Jerzy just had time to whisper to her: “Tomorrow, an SS from the political department will come to pick you up for an interrogation. See you tomorrow.” Cyla did not ask questions.

The next day, she saw in front of the entrance … Jerzy disguised in a Rottenfürher SS uniform. He greeted the guard and took Cyla away. They still had a pass to show to the guard at the exit of the camp … and then they would be free!

After nine nights of walking, they arrived at Jerzy’s uncle’s house. In order to guarantee their safety, they decided to separate. Jerzy joined the Polish resistance, and Cyla hid among peasants in a small village. When the end of the war came, Cyla could not get news of her lover.

One day, she was told that he died in battle. Desperate, she decided to go to New York to try to forget and start a new life. What she did not know is that the area where Jerzy was located was released only three weeks after the others. When Jerzy finally managed to break free, he came looking for Cyla … three weeks too late.

Jerzy’s family told him that Cyla died in a hospital in Stockholm, just before leaving for America. What he did not know was that it was a lie. Maybe because his family did not want him to marry a Jewish woman?

Many years later, in New York, Cyla had been a widow for a few years, and was the mother of one daughter. It was 1982. Cyla offered her Polish maid a coffee — a rare opportunity to chat with a fellow countryman. She then told the maid her story of love and escape from the Auschwitz camp. Much to her surprise, the maid told her that she once saw a man tell exactly the same story on Polish television. He was the headmaster of a school and his name … if she remembered correctly … was Jerzy.

“I could not believe it,” said Cyla. “I ended up finding his phone number. ‘Jurek, it’s me, your little Cyla!’ When he heard my voice, when I called him at dawn, he immediately understood that it was his love from Auschwitz.”

A few months later, Cyla decided to meet him. She was flying to Krakow. Jerzy was waiting for her at the airport with 39 roses in his hand … Love was reborn, and the emotion was immense. But Jerzy, who had married after the war, did not want to leave his wife or children.

“It’s fate that decided things this way,” Jerzy concluded. “But if I could do again, I would not change anything.”

This article was originally published in the French edition of Aleteia and has been translated and/or adapted here for English speaking readers.