Communion in the hand vs. Communion on the tongue: Pope Francis responds 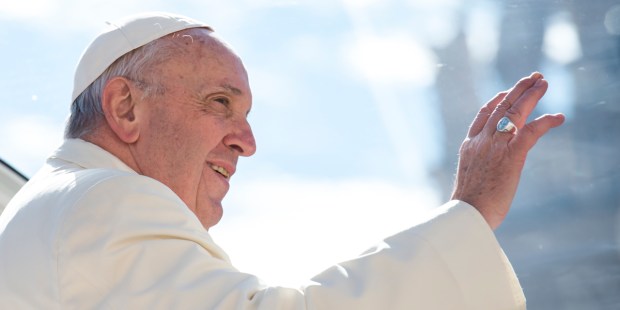 In today’s general audience, the pontiff explains how we “become what we receive.”

Pope Francis spoke to the faithful about the moment of Communion in the Holy Mass this Wednesday during his general audience in St. Peter’s Square.

“The Church desires fervently that the faithful also receive the Body of Christ in the consecrated hosts during Mass; and the sign of the Eucharistic banquet is more complete if Holy Communion is given under both species, knowing that Catholic doctrine teaches that under one species all of Christ is received,” he said, citing the General Instruction of the Roman Missal.

“According to the ecclesial practice,” the pope continued, “the faithful approach the Eucharist normally in the form of a procession and receive Communion standing or on the knees, as determined by the Episcopal Conference, receiving the Sacrament in the mouth or, where allowed, in the hand, as preferred.”

After Communion, the pope explained, that, “in order to ‘guard’ the received gift in our hearts, silent prayer is helpful. Lengthening this moment of silence, speaking with Jesus in our hearts is very helpful, as might also be singing a psalm or a joyful hymn.”

Read more:
How long is Jesus present in the Eucharist after we’ve received Communion?

The pontiff also explained that “as we process to receive Communion, in reality it is Christ who comes to meet us and assimilate us to himself. To receive the Eucharist means letting oneself be transformed into that which we receive. Nourished by the bread of life,” the pope said, “we become a ‘living Eucharist;’” that is, “we become what we receive.”

He also explained that after the “breaking of the bread,” the priest “invites us to look at the Lamb who takes away the sin of the world,” acknowledging the distance that separates us from the holiness of God and his goodness.

Check out the previous catecheses on the Mass in this Wednesday audience series: