Even after ISIS is defeated, Muslim extremists prevent Iraqi Christians from returning to their homes 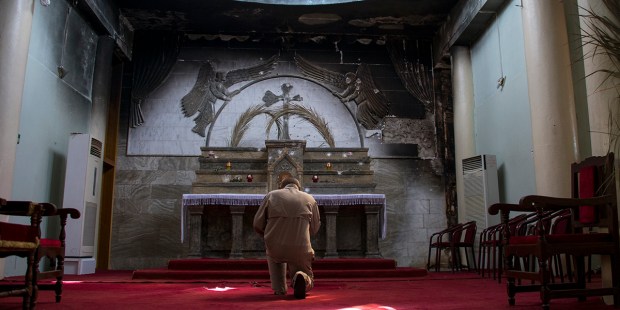 Only 20 Christian families have returned to Mosul since its liberation.

Syriac-Orthodox Archbishop Mar Nicodemus Daoud Sharaf heads the Archeparchy of Mosul, Kirkuk and Syriac Orthodox Church. In this interview, he addresses the plight of Christians in northern Iraq.

What is the current situation of the Christian community on the Nineveh Plains and in Mosul? How many Christians have returned to the region in the wake of the ouster of ISIS?

To start, the number of families that have returned to Mosul does not exceed 20! And these families have done so because their children had to go back to school and university; some heads of household are state employees and were forced go back to stay in their jobs. That does not mean that these families are living in a safe and stable situation. There are no guarantees for their security and their future there.

We need help from national and international authorities so that the criminal activities that targeted Christians before 2014 and the invasion of ISIS will not resume. Case in point: five shops owned by our Church in Mosul were seized by a customs officer for his personal benefit. He refuses to return them to us, saying we are infidels! Several discussions with central and regional government authorities have not availed us. This confirms the continued presence of religious extremism and social backwardness.

What about the Nineveh Plains?

What are the biggest challenges Christians in the region face?

There is a significant influx of Shiite Muslims into the region, which is having a big impact. This has to do with the role Shiite troops and militias played in the liberation of our towns and their restoration to the control by the Iraqi government. This battle against ISIS, however, was a patriotic duty—it doesn’t mean these fighters can take over our territory now. Christians are afraid and lack confidence about the future, in part because of this evident greed.

The Shiite Shabak people are turning on is, saying we are their enemy! They are putting pressure on us to leave our region and towns. That would be a humanitarian disaster.

In Bartella, the Shabak Shiites are completing a residential project of 25 acres; who will live there? It clearly means that there is a plan to bring in people from outside the region. Isn’t that a threat to the security of the region and to the Christian communities?

We are very pessimistic about this project and we call on all concerned parties to intervene, because it threatens to change the demographics of the region.

Last week, an office of the Islamic Dawa Party opened in Bartella. What is the significance of this?

We do not know what the real motives are, but every Christian citizen is wondering why an Islamic party is setting up shop in an exclusively Christian Syriac region. I think the answer is clear; it is meant to cause unrest and destabilize the security situation to oust the remaining Christians and seize their land. That is what happened years ago in Iraq’s southern provinces and in the cities of Tikrit, Baghdad and Hillah.

This is a very dangerous development. The headquarters was opened in Bartala, with an opening ceremony held in Qaraqosh, confirming their intention to open another branch for them there!

If there wasn’t a plan to threaten the Christian presence on the Nineveh Plains, why did the party have to open its doors in our area, while there are some 15 Muslim Shabak villages right next to us. Why wasn’t the Dawa Party office opened there?

This will only attract other Islamic parties to come to our territory, threatening our destruction.

What do you fear will happen?

If Islamic parties keep up the pressure to bring about a population shift in the Christian regions and towns; and there is a lack of legal recourse and protection of the rights of Christians, many of our people will want to leave the country; Iraq will lose all its Christians, and with it our commitment to brotherhood and peaceful coexistence—the ancient and authentic legacy of our faith.

What must be done?

We call for international and national legal protection for our people and our towns—that is one of the most fundamental human rights. We also demand that the Iraqi state provide concrete guarantees and pledges to limit these abuses and violations of the human rights of Christians.

In addition, we appeal to the Baghdad government to establish a security presence in non-Christian areas of the Nineveh Plains, so that Christian communities need not carry the burden of our protection.

Only when these conditions and demands are met can Christians live with dignity, peace and security.

What is your message to the West?

The first message is addressed to Christians. Tell the world that Christians are a model of peaceful coexistence, love and peace. Join hands with our Christian people in Iraq. Please listen to us and urge your governments to provide support for us to keep our hope alive and give us the confidence that we will be able to live safely in this country.

To Western governments, I say: help us for the sake of humanity, not for material gain. Do all that is in your power to help us and to encourage us to remain in our country.

This article was published by Aid to the Church in Need, a Catholic charity “helping to bring Christ to the world through prayer, information and action.”