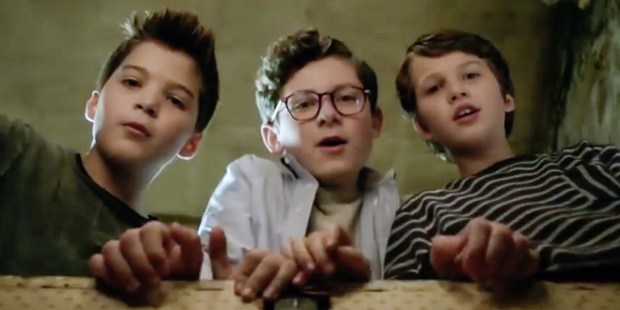 Amazon Prime’s freshest new show encourages boys to get off their screens and invent, imagine and explore.

Amazon will unveil The Dangerous Book For Boys, a series based on Conn and Hall Iggulden’s wildly popular bestselling book, on March 30. The series focuses on the McKenna family — Beth and her three sons, Liam, Dash and Wyatt — who’ve recently lost their imaginative, inventive father to sickness. But while Dad may be gone, he left something behind: A book filled with historical tidbits, quotes, and a hodge-podge of imaginative instructions (from how to make a paper hat to how to land a lunar module) that he hopes will entertain his boys, help them remember him and — just maybe — teach them some important life skills: to be courageous, thoughtful, and inventive.

And heck, it might even pull the kids away from their phones, tablets and shows for a while — all of which, incidentally, Amazon makes. Why, one of the kids seems to even play with an Amazon Fire tablet in the premiere.

There’s a certain irony that a TV show would encourage its young viewers to turn off the telly and play for a bit. But The Dangerous Book for Boys isn’t the only movie or show on television that encourages viewers to engage in a little more off-screen fun. Today’s streaming services — Netflix, Hulu and, of course, Amazon — have a few other offerings that might make children, especially boys, look at their world in a different way, and encourage them to step outside their living rooms and invent … explore … imagine …

The titular Cody Banks (Frankie Muniz) is just your everyday, average high-school junior when he applies to join the CIA’s Special Activities Division (SAD). Even after he gets accepted, Cody’s far from remarkable … initially. But as the movie goes, Cody grows — forced as he is to juggle his homework and household chores with, y’know, little things like saving the world.

There’s nothing particularly educational about this PG-rated actioner. Agent Cody Banks is simply imaginative, escapist fun. But what boy doesn’t want to be a super-cool secret agent at some point? This film may just inspire young lads to dream of building quixotic gadgets, peer around kitchen corners and maybe even put on a tie (gasp). The movie can be a bit vulgar and sensual at times, but it’s way more family-friendly than its spiritual ancestor, James Bond, and taps into the same imaginative streak that good ol’ 007 does.

In the wilds of the Middle Kingdom, strange creatures roam — black and white, deceptively cuddly creatures that have a thing for bamboo.

Pandas aren’t the only animals we meet in this charming, breathtakingly beautiful G-rated documentary. Monkeys, snow leopards and so many other critters share the screen (though, parents of young kids, beware — not every animal lives to see the credits roll). Nature is awesome, and few movies showcase that awesomeness quite as well, and quite as engagingly, as this one from Disney. Young viewers might learn to appreciate the natural world a bit more through Born in China (and other Disney nature docs also on Netflix), triggering a desire to embrace and preserve the God-given environs around us. But more than that, Born in China might also fire their desire to see and explore the world around them — not just in the faraway mountains of China, but even in their own backyards. After all, pandas have nothing on praying mantises.

Lewis doesn’t want much: Just a mom. She apparently left him when Lewis was just a baby, and an orphanage is the only home the boy’s ever known. But Lewis isn’t just your average 12-year-old kid: He’s an inventor, too. And when he creates a machine that scans his mind for memories of his mom — a desperate attempt to find her again — Lewis finds a crazy adventure that twists the very fabric of space and time.

Meet the Robinsons is an oft-overlooked Disney charmer that, in many ways, also embodies what made The Dangerous Book for Boys a bestseller: Its adventurous spirit, its love of invention, its celebration of imagination and its value of education. It is goofy and fun and free-spirited, and it comes with really heartwarming messages about family and perseverance, too.

“We keep moving forward, opening up new doors and doing new things because we’re curious,” Walt Disney is quoted on one of the movie’s end cards, “and curiosity keeps leading us down new paths.” Meet the Robinsons encourages young viewers to be and stay curious, and it may inspire them to think about how they, like Lewis, might change the world.

Every boy loves a story with a good mystery at its core, and this dreamy, beautiful, PG flick has a show-stopper of one: A 19th-century automaton (think rudimentary robot) with an enigmatic lock — all ready for a heart-shaped key.

The automaton’s the property of 12-year-old Hugo Cabret, who had been trying to repair the thing with his clock-making father. But when Hugo’s dad dies in a tragic fire, the boy comes to believe the  automaton holds a secret message — one he desperately wants to find. What is he to think when he runs into a girl — the goddaughter of a cranky old toymaker — who just happens to have a heart-shaped key hanging ’round her neck?

Directed by Martin Scorsese, Hugo was nominated for 11 Oscars in 2012 and deserved every one. Adults will watch it and discover a sumptuous love-letter to film, family, friendship and, above all, imagination. Children will watch it and be swept up in the mystery — and perhaps conjure up their very own mystery stories a little closer to home.

Did someone say mystery? Benjamin Franklin Gates (Nicolas Cage) has a big one on his mind — a mystery that might lead, according to his grandfather, to “the most spectacular treasure in history.” To find that treasure, all Ben has to do is decipher arcane clues that have foiled centuries worth of treasure hunters, evade evil antagonists and, oh yeah, steal the Declaration of Independence.

National Treasure is a trip into hokum. It teaches American history about as fastidiously as Bill and Ted’s Excellent Adventure. But here’s the thing: When it suggests that mysteries just might lurk in every bell tower or behind every bit of parchment, it’s absolutely right. History is filled with mysteries for those with the passion to look for them: Who built this weird obelisk? What’s up with that cracked bell? Why does Grandma have that ancient-looking pair of glasses on the mantel? And National Treasure, for all its imaginative flights of fancy, just might encourage young viewers to look at local landmarks and bits of family history a little more closely, thus discovering the real mysteries that they might hold.

These movies, and others like them, reinforce the sense that adventure isn’t just found on the screen. It’s all around us, really, if we’re just willing to look for it. But, as Amazon’s The Dangerous Book For Boys suggests, the only way to find it is to turn off the game, put away the phone and open the door to the bright world beyond.

Read more:
4 Movies that will show your daughter what a real princess is