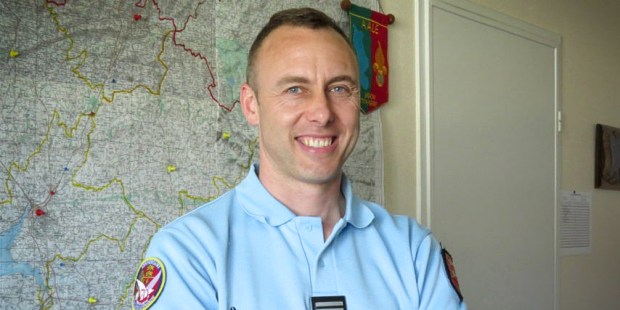 Lt. Col. Arnaud Beltrame being hailed as a hero

As a man claiming to be acting for ISIS undertook an attack on a supermarket in southern France Friday, police officer Arnaud Beltrame offered to take the place of one of the female hostages. He left his cell phone on so police could hear his interactions with the gunman inside.

As Beltrame entered the Super U supermarket in Trebes, a small town southeast of Toulouse, he was shot in the neck. Beltrame, 45, succumbed to his injury Friday night and is being hailed as a hero throughout France.

“Lt. Col. Arnaud Beltrame died in the service of the nation to which he had already contributed so much,” French President Emmanuel Macron said in a statement. “By giving his life to end the murderous escapade of a jihadist terrorist, he died a hero.”

As soon as Beltrame’s colleagues heard gunfire, they went in and killed the gunman, Radouane Lakdim, 26, a Moroccan-born French national. The death toll stands at five, including the attacker. More than a dozen were injured.

Lakdim was a petty criminal already on the radar of French police for his links to radical Salafist networks, authorities said, according to CNN:

When he burst into the supermarket Friday, he shouted he was a soldier from ISIS, witnesses said, before opening fire and killing a worker and a customer.

Beltrame was married but had no children, CNN reported. He had served in the French military police and received a number of awards for bravery. He served in Iraq in 2005, and was given an award for bravery in 2007, Macron said. For four years, he was a commander in the Republican Guard, which provides security at the Élysée Palace, home of the French president.

In 2012, he was knighted in France’s prestigious Legion of Honor. Beltrame also was secretary-general in the Ecology Ministry for four years.
Last year Beltrame was appointed deputy commander of the anti-terror police in the Aude region.

According to the newspaper La Dépêche du Midi, Beltrame led a simulated terror attack in December on a supermarket for training purposes, similar to the one Friday in which he lost his life.

“His leadership skills, his willingness, his unfailing commitment were appreciated by everyone, especially in the development of counterterrorism capacity in the Aude police force,” Macron said.