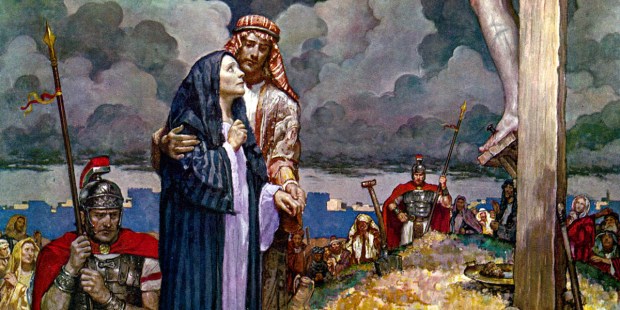 Each thing he said from the Cross cost him dearly. So surely we shouldn’t ignore any of those 7 last words.

If all we knew about Jesus’ life were from his public ministry, it would be easy to ignore the Blessed Mother. She’s an integral character in the infancy narratives, but once Jesus reaches adulthood she fades into the background. The last time she speaks in all of Scripture is in John 2, the Wedding Feast at Cana. That leaves 19 more chapters of John’s Gospel in which she says not a word.

In fact, the next time she appears Jesus seems to be downplaying her role. “Who are my mother and sisters and brothers?” he asks, making us wonder if maybe all those Catholic devotions to the Virgin Mary aren’t a bit excessive.

And that’s it. No discourse on the Rosary, nothing about Marian consecration, not even a little statue of Mary. Nothing more about the Mother of God—until the Cross.

Though she could have spared herself the suffering, expecting in faith what was to come on Easter morning, she refused to leave his side.

It’s a beautiful image, this support she showed him in his agony. But it would prove to be a gift to us more than to him. Though he had been silent about his mother for three years, Jesus would be silent no more. Hanging on the Cross, every breath was excruciating. In order to speak, he had to pull himself up to take a deep breath, ripping the nails further through the holes in his hands and pushing horribly down on the nail through his feet.

There’s a reason he said only seven things in the three hours he hung on the Cross—every thing he said cost him dearly. Which means that every thing he said must have been terribly important. “I thirst” wasn’t just an aside that he was parched, it was a cry of his longing for souls.

So why on earth would he bother asking John to take care of his mother? Surely he knew that his disciples would watch out for her, childless widow as she would now be.

Perhaps there was something practical about this; it certainly shores up the Catholic belief that Mary was ever virgin. If Jesus had brothers and sisters, why would he have needed to put his mother in John’s care? But any time we see “the disciple whom Jesus loved,” we’re being invited to see ourselves in that mystery.

Though he likely lived with his mother for 30 years, Jesus spent the three years of his public ministry saying very little to or about her. But on the Cross, when every word was agony, he made very sure to tell all Christians: my mother is your mother now. He entrusted us to her with what was nearly his dying breath, asking us to let her be a mother to us.

This is where Christian devotion to the Blessed Mother comes from: the fact that as he hung dying, Jesus was concerned that we know how important his mother ought to be in our lives. This makes her more than optional, as she might have been if these two verses hadn’t made the final cut.

We can appreciate Mary as Mother of God without having a relationship with her. We can understand her role as intercessor (as at Cana) without letting her into our heart. But when our God was handing himself over to death, he called out, “She’s your mother now. You need her.”

For some of us, it’s natural. Maybe you were raised with Marian devotions or had a particularly lovely (or awful) relationship with your own mother. Maybe you had a profound conversion at Lourdes or Fatima. Maybe you were fascinated by Mary even before you became Catholic and found that she led you to faith in her Son and his Church. Praise God!

But maybe you’re more like me, and while you can accept all the Church’s teachings on Mary you still struggle to understand why she matters to you in your life right now. Read and study and pray, but in the end let this be enough: at the moment of his death, Jesus asked you to let her be your mother. If we work on loving her as a favor to Jesus, we’ll find one day that it was a gift to us after all.

Read more:
Mary will find her way into your life with creativity and persistence