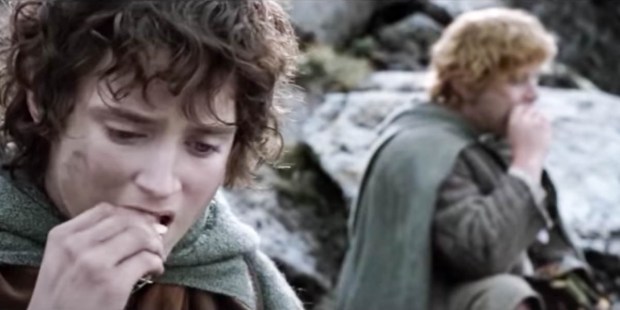 Catholic author J.R.R. Tolkien is well-known for his mythological realm of Middle Earth and highly influential Lord of the Rings series of books. In fact, one survey in 1997 voted Lord of the Rings the “book of the century.”

However, few are familiar with his greatest love, which gave him profound strength during his darkest hours.

To find that, we must open up a letter he wrote to his son Michael. At the time Michael was 21 years old and having relationship problems. Tolkien wrote to him to share his advice about women, but also related to his son the greatest love he could ever possess.

Out of the darkness of my life, so much frustrated, I put before you the one great thing to love on earth: the Blessed Sacrament … There you will find romance, glory, honour, fidelity, and the true way of all your loves upon earth.

Many years later, when Michael was 43, Tolkien received a letter from his depressed son looking for consolation. It appears Michael wrote to his father about his “sagging faith” and began to doubt if God or the Catholic Church was true. This was Tolkien’s response.

The only cure for sagging of fainting faith is Communion. Though always Itself, perfect and complete and inviolate, the Blessed Sacrament does not operate completely and once for all in any of us. Like the act of Faith it must be continuous and grow by exercise. Frequency is of the highest effect. Seven times a week is more nourishing than seven times at intervals.

Tolkien was known to attend daily Mass at a nearby church and his eldest son, John, became a priest and was with his father at his death bed, likely giving him holy viaticum, the Holy Eucharist, as he passed from this life to the next.

Not surprisingly, within Tolkien’s Middle Earth there was a special type of bread called lembas, which sustained Frodo and Sam as they reached the place where their journey ended.

The lembas had a virtue without which they would long ago have lain down to die. It did not satisfy desire, and at times Sam’s mind was filled with the memories of food, and the longing for simple bread and meats. And yet, this way bread of the Elves had potency that increased as travelers relied upon it alone and did not mingle it with other foods. It fed the will, and it gave strength to endure, and to master sinew and limb beyond the measure of mortal kind.

For Tolkien, the Eucharist was that “way bread” or “food for the journey” that sustained him throughout every trial. While his stories may be some of the most popular works of fiction of all time, they were not his greatest love. Jesus, truly present in the Blessed Sacrament, was what Tolkien loved above all things.

Read more:
Listen to rare recordings of J.R.R. Tolkien reading ‘The Lord of the Rings’