3 Signs your marriage is in trouble … or is it? 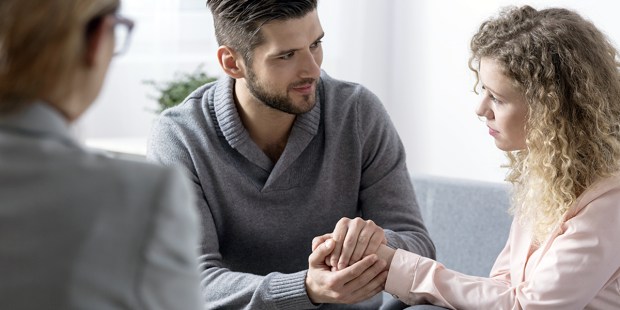 Certain things that spouses do make it seem like there’s trouble in paradise, when in fact, there’s none at all.

As I pulled out of the garage the other day, both kids strapped into their car seats behind me, I went through the routine checking off of things in my head to make sure we had everything. Snacks? Check. Diapers? Check. Phone? Check. I started to relax until I glanced at my left hand on the steering wheel. I’d forgotten to put on my wedding ring.

Refusing to entertain the ever so slight possibility that people would notice and assume there was trouble in my marriage, I opted not to turn around and get the ring. But it got me thinking about certain things that spouses do that often indicate trouble in paradise, when in fact, there’s none at all. Here are a few that might mean your marriage is on the rocks — or maybe, not at all.

You’re not rocking the ring

Yikes …
“Those of us who are married have to be really careful with how we represent our marriages,” advises Tiya Cunningham-Sumter, a certified life and relationship coach. “Not wearing a ring can definitely send a message that you are available, interested, or having trouble at home.”

If someone isn’t wearing a wedding ring in hopes of appearing single, it goes without saying that his or her marriage is probably a tad tumultuous. Whether or not they’re sincerely open to infidelity, the fact that they’re attempting to project a false image of themselves is not conducive to a successful marriage.

But on the other hand (no pun intended) …
Spouses who appear ringless are often exceptionally satisfied, in love, and committed within their marriages. Prince William is one of them. So why the bare finger? Wife and mom Lori Garcia gives six totally legitimate reasons she’s often found without her ring, such as forgetting to put it on. I can testify to the validity of this, since, as an at-home mom, it can be a hassle to change out of my jammies, let alone don jewelry.

Protecting the pricey possession from damage or dirt is another reason Garcia cites, since there are plenty of unglamorous tasks that leave a ring less than pristine. Sure, there are some less expensive options for your finger to mark yourself as spoken for, like the silicone bands or having a ring tattooed on. But, as Garcia puts it, “I have nothing to prove.”

You sleep in separate beds

This is an issue …
The marital bed is a precious space of intimacy for spouses, and when there’s friction in a marriage, it’s not uncommon for one person to withdraw from it. “When I hear couples are sleeping in separate bedrooms, my initial reaction is ‘uh-oh. There’s trouble,’” according to Linda Lewis Griffith, a marriage and family therapist. “I surmise that at least one of the parties is pulling away from the other.” Griffith goes on to predict the probable deterioration of the relationship.

Read more:
After Cheating: Can a Marriage Be Saved?

For spouses who sleep in separate bedrooms because they are averse to physical closeness or intimacy with one another, there’s definitely trouble.

However …
There are plenty of happily married couples that share many things, such as joy, fulfillment and satisfaction, but a bed is not one of them. As Starla Hester explains of her own separate bedroom arrangement, “My husband and I have been happily married for over 10 years and sleeping separately works for us.” Because of his job, Hester’s husband receives late night phone calls that used to wake her up. As a result, she began sleeping in their guest room. “My husband has no issues with it,” she noted, “since I sometimes wake him up with my teeth grinding.”

It’s not unusual for people to sleep better solo. There’s less likelihood of being awakened by snoring, stolen covers, or any of those other pesky tendencies we have while snoozing. As Hester declared, “It’s never the bed that makes the marriage, and sometimes sleeping apart can make the relationship stronger.”

Ouch …
Although it’s admirable for spouses to seek professional help for their relationship, having a couples’ therapist is often an indication that they’ve had difficulty getting along. Most married couples who seek counseling together do so because they need help communicating more effectively and are hoping to save a struggling marriage.

Prevention
Believe it or not, some very smart married couples seek therapy when their relationship is going just fine. “It’s never too early in a relationship to work on the development of healthy communication and improvement of conflict resolution techniques,” explains psychiatrist and relationship expert Ayo Gathing, MD. “Strengthening these tools will help build a stronger foundation and make your relationship more resilient in the future.” A lot of couples who end up in therapy wish they’d started sooner and had the tools to address smaller issues before letting them grow into major ones.

So although marriage counseling definitely comes with a stigma, it can be used purely as a preventative measure and is not at all a guarantee that a duo has been feuding.

So there you have it: Three indications that your marriage might be headed for Strugglesville. But then again, maybe not at all.

Read more:
5 Signs you need marriage counseling … even if your marriage isn’t in crisis