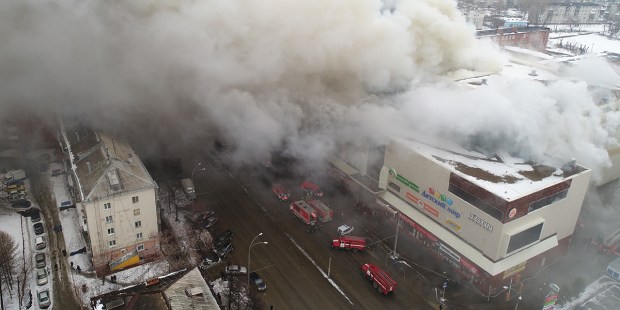 Dozens of children are feared dead in a devastating mall fire in Russia, where the death toll of 64 is feared to go higher. Initial eyewitness reports and investigations suggest that fire exits were illegally blocked and that a security guard had turned off the alarm system.

Pope Francis has sent a telegram of condolences following the fire. In the telegram, signed by the Vatican Secretary of State, Cardinal Pietro Parolin, Pope Francis says he is “deeply saddened” and “offers heartfelt condolences to all those affected by this tragedy.” He offers prayers for all who mourn, as well as his “spiritual closeness to authorities and emergency personnel as they assist the injured and continue their search for the missing.”

The pope said he entrusts all the deceased to the merciful love of God and he concludes the message by invoking upon all the Lord’s blessings of peace and consolation.

The fire broke out Sunday afternoon at the Winter Cherry shopping center in the Siberian coal-mining city of Kemerovo when the mall’s shops, cinema and bowling alley were packed.

Russia’s Investigative Committee said that a fire safety technician at the complex “switched off the alarm system” after being alerted about the fire, the BBC reported.

A local politician also said that a fire extinguisher that could have doused the flames at the start did not work.

Russian media said most of the roof had collapsed and that the fire engulfed a children’s trampoline room and a cinema on the fourth floor of the complex, the BBC reported.

The cause of the blaze is still not known, but the region’s deputy governor, Vladimir  Chernov, was quoted as saying the fire probably began in the children’s trampoline room.

“The preliminary suspicion is that a child had a cigarette lighter which ignited foam rubber in this trampoline room, and it erupted like gunpowder,” he said.

But national television Rossiya 24 TV said an electrical fault was the most likely cause.

Kemerovo is about 2200 miles east of Moscow.