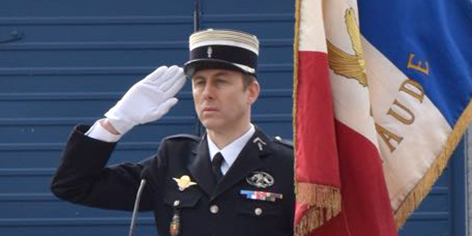 Pope Francis send a letter of condolence praising the French police officer who “gave his life out of a desire to protect people” during a terrorist attack in southern France.

During the March 23 attack, Lt. Col. Arnaud Beltrame talked the gunman, Redouane Lakdim, into letting him trade places with a woman Lakdim was holding hostage at a grocery store in the town of Trebes. Beltrame was seriously wounded and later died of his injuries.

Prior to the attack on the grocery store, Lakdim killed a passenger in a car he hijacked, shot at a group of police officers, and then entered the grocery store claiming that he was a member of the Islamic State. He murdered two people before French police stormed the store and killed him.

According to a report in the Catholic Herald, Beltrame was a practicing Catholic who experienced a conversion in 2008. He and his wife, Marielle, were married in a civil ceremony in 2016, but were preparing to receive the sacrament of marriage.

Bishop Alain Planet of Carcassonne and Narbonne celebrated a memorial Mass for the police officer on March 25 in Trebes, in which he compared Beltrame to St. Maximilian Kolbe who was executed in a Nazi death camp after offering his life in the place of another prisoner’s.

Pope Francis addressed the letter of condolence to Bishop Planet, and offered his prayers for the families of the victims.

“I particularly recognize the generous and heroic act of Lieutenant-Colonel Arnaud Beltrame, who gave his life out of a desire to protect people,” the Pope wrote.

“I condemn again such acts of indiscriminate violence which cause so much suffering,” the Pope said.

Fr. Jean-Baptiste, a priest from the Mother of God of Lagrasse Abbey, said of Beltrame’s heroic act, “It seems to me that only his faith can explain the madness of this sacrifice which is today the admiration of all. He knew, as Jesus told us, that ‘There is no greater love than to give one’s life for one’s friends’ (John 15.13). He knew that if his life began to belong to Marielle, it was also to God, to France, to his brothers in danger of death. I believe that only a Christian faith animated by charity could ask for this superhuman sacrifice.”

“I was able to join him at the hospital in Carcassonne around 9pm last night. The gendarmes and the doctors or nurses opened the way with remarkable delicacy. He was alive but unconscious. I was able to give him the Sacrament of the Sick and the apostolic blessing at the moment of death, ” he wrote, as reported in the Catholic Herald.