Watch 7 ancient ruins of the world, reconstructed in seconds 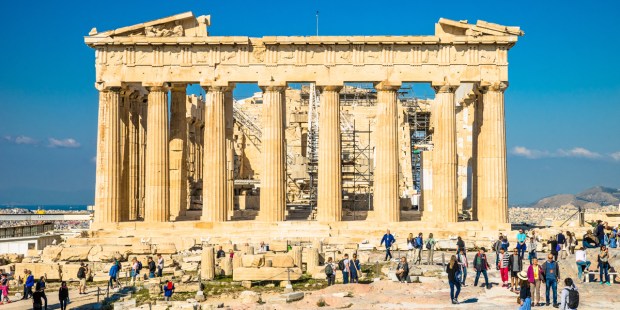 If you’ve even been on a tour of an ancient ruin then you know that your guide will inevitably ask the group to imagine what it might have looked like before becoming weathered by time. Now, thanks to some handy photo editing and the good folks at Expedia, we no longer have to imagine. The Expedia crew took photos of some of the grandest and most famous archaeological sites and rewound time to give us an accurate glimpse at the glorious structures created by civilizations much earlier than our own.

The Parthenon is an temple dedicated to the goddess Athena, whom the people of Athens considered their patron. The structure was completed in 438 BC, although the decoration of the building continued for another six years. Although it is called a temple, it was not primarily used as a place of worship and has seemingly no connection to the cult of Athena. The building housed a grand golden statue of Athena, which Wikipedia describes as more of a money reserve than a religious ornament:

According to Thucydides, Pericles once referred to the statue as a gold reserve, stressing that it “contained forty talents of pure gold and it was all removable.” The Athenian statesman thus implies that the metal, obtained from contemporary coinage, could be used again without any impiety.

Hadrian’s Wall was built during the Roman occupation of Britannia. It stretches on for 73 miles, making it the largest known Ancient Roman artifact. Construction began in the year 122, at the command of emperor Hadrian, and was finished in just 6 years. Here we see one of the milecastles, which were placed along the wall at intervals of 1 Roman mile. These forts were manned to guard the land from northern tribes, but the wall served more importantly as a symbol of Rome’s power, as it marked the northernmost limit of the empire.

The Pyramid of the Sun – Teotihuacán, Mexico

The Pyramid of the Sun is a site that is shrouded in mystery. It is the third largest pyramid in the world, rising roughly half as high as the Great Pyramid of Giza. Construction began in the year 100 and is believed to have lasted nearly 100 years. The structure is located in the center of a large ancient city. The name Teotihuacán was given by the Aztecs when they discovered the city, which had been mysteriously abandoned several hundred years previously.

Nohoch Mul is the tallest Mayan pyramid on Mexico’s Yucatan Peninsula, standing at 137 feet. It is estimated to have been built between 100 BC and 100 AD, and was a central location in the Mayan civilization. At the peak of the Mayan empire, Nohoch Mul was home to nearly 50,000 people, but the site was abandoned around 1550, when the Spanish conquistadors arrived in Central America.

Luxor Temple was commissioned by Amenhotep III, in 1380 BC, and was later completed by Rameses II about a hundred years later. Unlike other temples of this era, the Luxor was not dedicated to a cult god, but rather “the rejuvenation of kingship.” This was the place where ancient Egyptian kings were crowned, as well as where Alexander the Great claimed he was crowned.

This ancient structure was built by Quintus Lutatius Catulus in 101 BC in fulfillment of a vow made during the Battle of Vercellae. During the fight against invading Celto-Germanic tribes, Consul Gaius Marius made a plea to the goddess Fortuna, promising a temple and a great sacrifice if victory was his. Excavations of the site found a large statue of the goddess Fortuna, which is now held in Capitoline Museums. This site is also used as a sanctuary for Rome’s feral cats, which visitors are encouraged to adopt.

The Temple of Jupiter was the most important temple of Ancient Rome, holding a cathedral-like position in the religion of Rome. This is not the original Temple of Jupiter; in fact it is the fourth iteration of the structure. Between 500 BC and 80 AD the Temple burned down and was reconstructed 3 times. The last version of the temple was completed by Domitian, whose tastes were the most lavish. It is believed that he used more than 12 thousand talents of gold just to gild the bronze roof.