Chinese bishop: No strict divide between “underground” and “official” church 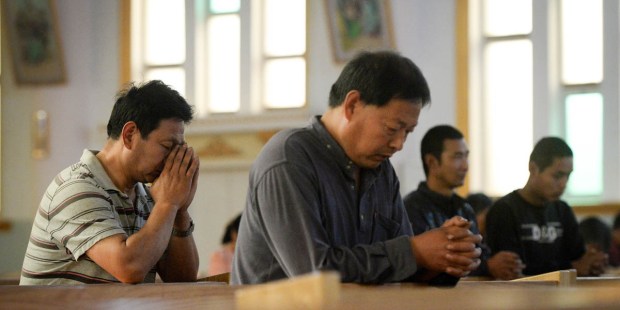 A look at the numbers gives an overview of the situation on the ground.

The separation in mainland China between the “official” government-sponsored church and the “underground” church is not so clear, according to Bishop Jean-Baptiste Yang Xiaoting, coadjutor bishop of Yan’an, at a conference last week at the Pontifical Gregorian University of Rome.

This is reflected by the diversity of the country’s bishops.

This is the case of Bishop Yang Xiaoting in particular: he was appointed coadjutor in 2006 by Benedict XVI, and received episcopal ordination in 2010 with government approval.

According to estimates, China has about 10 million Catholics. Some of the diocesan pastors of these faithful are “legitimate but illegal,” that is to say, appointed by Rome but not recognized by Beijing; others are recognized by both parties, and are therefore “legitimate and legal.” Still others have not received a mandate from the Holy See, but have been appointed by the government: they are, therefore, “legal but illegitimate.” (Legitimacy refers to their ordination with papal mandate; legal, of course, refers to the government approval.)

As for them, the legitimate but illegal bishops number 17, or 22 percent. Two of them are in conflict with the presence of a bishop appointed by Beijing without the consent of Rome. In December, according to specialized press, the Vatican asked the legitimate pastors of these dioceses to withdraw in favor of the bishop appointed by the government.

Lastly, there are seven bishops, 9 percent, appointed by Beijing without a mandate from Rome. The Vatican considers five of these dioceses to be vacant, the other two being those where there is also a legitimate bishop. In February, the press reported that these seven bishops, excommunicated for their ordination without a Vatican mandate, had written a letter of apology to the Supreme Pontiff.

Moreover, two bishops recognized by the Vatican, Bishop James Su Zhimin and Bishop Cosma Shi Enxiang, have been missing since 1996 and 2001 respectively. It is reported, however, that the latter died in 2015. In addition, another Bishop, Thaddeus Ma Daqin, auxiliary of Shanghai, appointed by both parties, has been prevented by Beijing from carrying out his mission since his ordination in 2012.

According to several sources, including Cardinal Joseph Zen, retired bishop of Hong Kong, Rome and Beijing are approaching an agreement on the issue of the appointment of bishops. It is a complex subject, since the Church holds that the ordination of its bishops falls under the jurisdiction of the Successor of Peter, while the Chinese Constitution sees this as against its Article 36, which forbids the faithful of a religion to be “subject” to “foreign dominion.”