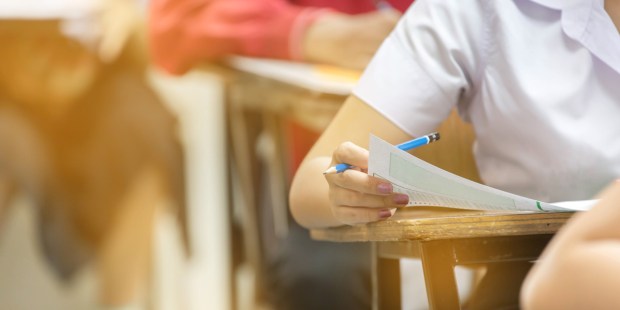 Standardized testing doesn’t accurately measure understanding, and is no predictor of future success.

I am not a fan of testing or grades. I’ve said it before and I’ll say it again — testing doesn’t accurately measure learning, and grades actually stunt learning. But of all our modern educational practices, only one sparks genuine rage in my soul: the standardized test.

I took standardized tests all through school. Standardized testing took off during the 80s, so it was a regular feature of my primary (and secondary) education. As a kid, I usually got so tired after a few pages of filling in bubbles that I started picking the answer that seemed the least wrong, without really expending the energy required to solve the problem. Sometimes I felt vaguely guilty about this, as if it were some kind of moral failing. As an adult, I know that it was really my brain’s effort to protect myself from being overtaxed disproportionately to my development.

But it wasn’t until I took the SAT and ACT tests, those holy grails of standardized testing that determine 11th- and 12th-graders’ entire future, that I actually became angry with the test. Several times on both tests I came across questions that were worded in such a way that I could tell what answer they wanted me to choose. But I also knew why those answers were wrong — or, at the very least, not as right.

Standardized tests are, unfortunately, only the tip of the iceberg. They’re part of the increasing — and increasingly destructive — drive to measure “learning outcomes” or, more accurately, to measure the amount of knowledge a student has been filled up with in much the same way one might measure the liquid in a measuring cup. The problem, as professor Molly Wharton eloquently points out in The New York Times, is that learning is not quantifiable.

Consider that holy grail of learning outcomes, critical thinking — what the philosopher John Dewey called the ability “to maintain the state of doubt and to carry on systematic and protracted inquiry.” Teaching it is not a cheap or efficient process. It does not come from trying to educate the most students at the lowest possible cost or from emphasizing short, quantifiable, standardized assignments at the expense of meandering, creative and difficult investigation.

Producing thoughtful, talented graduates is not a matter of focusing on market-ready skills. It’s about giving students an opportunity that most of them will never have again in their lives: the chance for serious exploration of complicated intellectual problems, the gift of time in an institution where curiosity and discovery are the source of meaning.

Higher education, particularly in the liberal arts, really is a gift. It’s a gift that gives students the time and guidance necessary to develop true intellectual curiosity, creativity, and innovation. It’s the reason why many CEOs overlook specialized majors in business or marketing in favor of candidates who hold “useless” degrees in the liberal arts.

The creativity and adaptability of liberal arts majors isn’t something that can be measured by a standardized test — in fact, these students will often test poorly on them. That’s because true knowledge isn’t the same thing as the ability to retain and spit back information. True knowledge requires the ability to synthesize information, understand it, and create a novel solution. And that’s where liberal arts students excel, although they certainly aren’t the only students capable of adaptive thinking and true understanding.

So if your high school student hates standardized tests (or if you’ve always hated them yourself), don’t despair. That isn’t a sign of stupidity or failure — it’s far more likely to be a sign of creative, adaptable thinking and a predictor of future success.

Read more:
Standardized testing is scaring our kids and ruining their education