Where Pope Francis finds himself every Holy Thursday 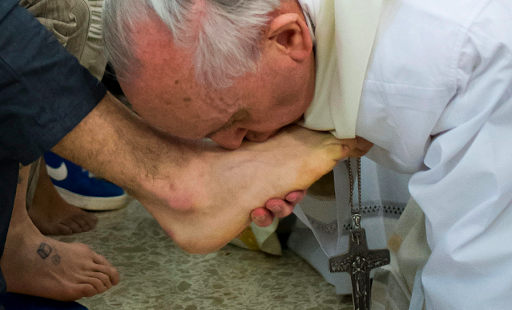 Pope Francis will visit the Regina Coeli prison, the largest in the Italian capital, on March 29, 2018, to celebrate the Mass of the Lord’s Supper. Since the beginning of his pontificate, the Argentine pope has always visited marginalized people for this Mass during which the celebrant washes the feet of 12 people, as Christ did with his disciples.

Fifteen days after his election to the Chair of Peter, Pope Francis decided to break with the tradition of celebrating Mass on Holy Thursday at the Cathedral of Rome, Saint John Lateran. Instead, on March 28, 2013, the new pontiff went to the juvenile prison of Casal del Marmo.

During this ceremony, the pope once again broke with tradition by washing the feet of two young women. This was an unprecedented practice in the history of the papacy, especially as the Roman Missal of 2002 indicates that the group of people chosen for the washing of the feet must be made up of “men.”

Modification of the Missal

In order to normalize this situation, in 2016 the Successor of Peter modified the respective rubric of the Roman missal. “This group may consist of men and women,” indicates the decree of modification, specifying that it is desirable that it include “the young and the old, healthy and sick, clerics, consecrated persons and laypeople.”

For the second Holy Thursday of his pontificate, on April 17, 2014, the Bishop of Rome presided over Mass at the Saint Mary of Providence Center in Rome, which receives people with serious conditions requiring full-time care. That year, the center celebrated the fifth anniversary of the beatification of its founder, Father Carlo Gnocchi.

The following year, on April 2, 2015, Pope Francis went to the Roman prison of Rebibbia. The population of prisoners is made up of both men and women, including mothers and their children. This detention center had already been visited by his two predecessors, Benedict XVI and John Paul II. The visit of the Polish pope was very special, since he went there to see Mehmet Ali Agça, the man who tried to assassinate him on May 13, 1981.

Read more:
Pope visits innovative home for mothers convicted of minor crimes, who keep their children with them

Three Muslims and a Hindu

On March 24, 2016, the head of the Catholic Church celebrated the Mass of the Lord’s Supper at a Center for Asylum Seekers in northern Rome. The pope washed the feet of a volunteer and eleven migrants, and made another innovation: among these, seven were not Catholics. Three were Coptic Christians, and there were also three Muslims and one Hindu.

In 2017, the prison that welcomed the Pope for Holy Thursday was the only Italian penitentiary center reserved for “collaborators of justice.” In order to protect the anonymity of the detainees to avoid any risk of reprisals, the Mass from Paliano Prison was kept behind closed doors. Among the 12 inmates whose feet Pope Francis washed was a Catholic converted from Islam.