Grieving mother’s inspirational message to teen who killed her son 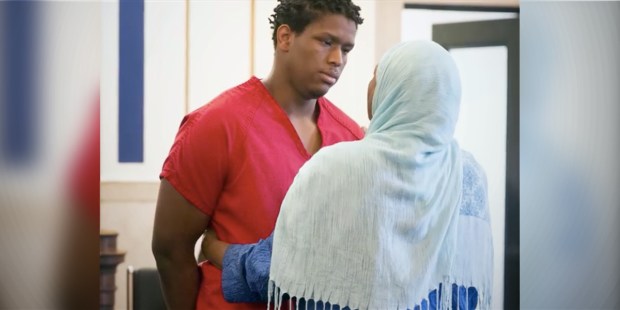 Her words to the man who took her child’s life rocked the courtroom.

Back in June 2015, Suliman Abdul-Mutakallim, a 39-year-old Navy veteran from Cincinnati known as “Sam,” was walking back home to his wife with a bag of groceries in hand when he was shot in the back of the head and robbed by three young men. As he lay dying on the floor, one of the attackers, 14-year-old Javon Coulter, was captured on video reaching into the victim’s pocket and sharing its contents with the other two men, before going off with about $60 and the shopping goods, abandoning Abdul-Mutakallim on the sidewalk.

Abdul-Mutakallim, who had served in Iraq, later died at the hospital surrounded by his family. As he passed away, his mother, 66-year-old Rukiye, said in accordance with her religious beliefs: “Until I see you again.” The Cincinnati Enquirer reports that Rukiye, a devout Muslim, “has lived with that image of her dying son for more than two years. Her grief is constant.”

Yet, despite the agony of losing her son (who was a Christian) in such horrific circumstances, Rukiye has displayed extraordinary mercy and forgiveness to those who killed him. Two years after his death, two of Abdul-Mutakallim’s attackers, including Coulter and Valentino Pettis, who was 17 at the time of the robbery, have recently appeared in court and pleaded guilty to involuntary manslaughter, with Coulter also admitting to robbery.

In an emotional scene shortly after Coulter’s admission of guilt in the murder, Rukiye approached Hamilton County Common Pleas Judge Megan Shanahan for permission to hug Coulter, now 16. In a video posted in the Cincinnati Enquirer, Rukiye is seen addressing Coulter in court, explaining: “I don’t hate you, I can’t hate you. It’s not our way.” With dignity and compassion she continued: “Showing Rahmah, mercy … that is our way.”

Determined that her son’s death should not be in vain, Rukiye explained to the teenager: “His death was already ordained,” and that “maybe the purpose is to save your life.” Acknowledging Coulter’s young age, she went on to say how she wanted him to still have a chance at life once he left prison. That she and her family would now be a part of his life.

“If they have no light, then this same disease is going to repeat itself and they are going to take another person’s child’s life and eventually their own.” And she added, “Revenge will solve nothing.” Rukiye then took the opportunity to hold Coulter’s mom in her arms, understanding the pain she must be feeling.

While Rukiye’s strength and love for humanity is exceptional, it echoes the values of her son, who had posted on Facebook after a neighbor’s death: “To all my friends and family, we don’t know when our time on earth is going to be done, so if you haven’t made your heart right with God, please don’t delay.”