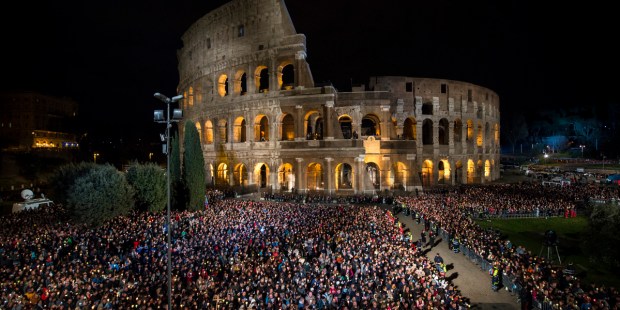 This year, the meditations on the fourteen stations of the Way of the Cross were written by fifteen young people between the ages of 16 and 27. Two things are unusual in this regard. First, there is the age of the authors: they are young people and adolescents, nine of whom are students at the Liceo Pilo Albertelli in Rome. Second, there is the “choral” aspect of their work, which is a symphony of many voices of different tonalities and timbres. These are not “young people” in general; instead, they are Valerio, Maria, Margherita, Francesco, Chiara, Greta and the others.

With the enthusiasm typical of their age, they took up the challenge presented by the Pope in this year devoted particularly to the younger generation. They did so using a precise methodology. Gathered around a table, they read the accounts of the passion of Christ from the four Gospels. In other words, they stood before each scene along the Way of the Cross and “saw” it. Then, after a certain time had passed, each young person spoke about a detail of each scene that had struck him or her the most. In this way, it became easier and more natural to assign the individual stations.

When we are young, we want to see, we want to see the world around us; we want to see everything. The scene of Good Friday is powerful, even in its horror: seeing it can lead to revulsion or to mercy that provokes an encounter. This was the way of Jesus in the Gospel and every day, including today. He encounters Pilate, Herod, the priests, the guards, his mother, the Cyrenean, the women of Jerusalem and the two thieves, his final companions on the way. When we are young, every day we have a chance to encounter another person, and every encounter is new and surprising. We grow old when we no longer want to see anyone, when fear closes doors and defeats trust and openness. It is the fear of change, because to encounter means to change, to be prepared to set out once more on our journey with new eyes. To see and to encounter leads, finally, to prayer, because seeing and encountering give rise to mercy, even in a world that seems pitiless and, in times like our own, abandoned to senseless anger, meanness and the desire not to be bothered.

Yet if we follow Jesus with all our heart, also on this mysterious journey to the cross, courage and trust can be reborn. After we have seen, and opened ourselves to encounter, we will experience the grace of praying, no longer alone but together.

MEDITATIONS AND PRAYERS composed by