Thousands of Venezuelans cross the border into Colombia each day 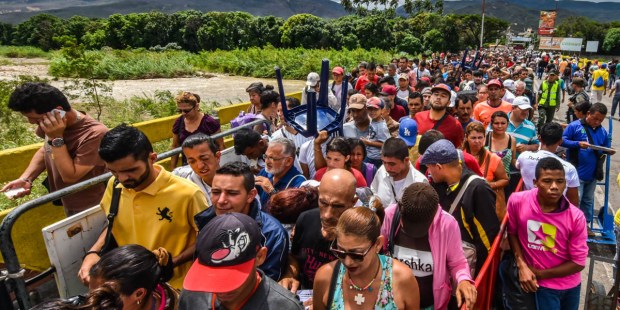 Indigenous communities are welcoming, but they can only take so much.

As Venezuela’s food crisis shows no sign of improving, areas of neighboring Colombia are being impacted by desperate Venezuelans fleeing across the border. One indigenous community in northern Colombia, the Wayuu, are welcoming members of the same tribe who live in Venezuela, but are having a difficult time providing for both themselves and their guests.

The Wayuu have a indigenous understanding of “one people” across national boundaries, and the autonomy they enjoy under the Colombian government provides a modicum of freedom for border crossings.

Nevertheless, their resources are being stretched.

“They already don’t have enough livelihoods to live in a good health or nutrition condition,” said Jelena Kaifenheim, an official with the Catholic charity Malteser International Americas, which has been working in the area for three years. “They told us, ‘We don’t know how to feed ourselves and the arriving people.'”

She said that unofficial numbers estimate 6,000 to 8,000 border crossings from Venezuela into Colombia each day. Many of the Venezuelan newcomers tell Malteser that the social and economic conditions in their country led to the loss of their livelihood and access to health services.

“Their living conditions turned so bad that they didn’t see an alternative to leaving,” Kaifenheim said Tuesday.

Those who have the means move on from La Guajira, the department, or province, where Malteser works, because the area is extremely poor. Those without the means stay, and their presence adds to the labor market: that drives wages down and local resentment up.

“Another quite worrisome situation is the very bad health status that many of the Venezuelans crossing the border have, with insufficient healthcare in Venezuela, and often they have incomplete vaccination schemes, so there is a potential risk to reintroduce diseases which were already eradicated or had very low values in Colombia, such as measles, diphteria or even malaria,” Kaifenheim warned.

Malteser has good cooperation from the Colombian federal and local governments, she said. Kaifenheim said that UNHCR, the United Nations refugee agency, recently established a presence in the area, but it takes time for outside agencies to gain traction. One prerequisite is to gain trust with the indigenous communities. One must first approach their spiritual leaders, Kaifenheim noted.

“You have to understand their traditional cultures and beliefs and be respectful towards them,” she said. “For us it was a yearlong process to develop a good and close relationship with them to gain trust and have access. This is quite challenging for new actors.

“It takes time,” said Kaifenheim, who is based in Cologne, Germany, but oversees Malteser projects throughout Latin America and the Caribbean. “The indigenous understanding of time is different from our understanding. So, moving forward quickly is not always easy, but we also encountered a lot of acceptance.”

Most indigenous follow “natural religions,” she said, though some practice Christianity.

Malteser International Americas, the humanitarian relief agency of the Order of Malta, announced this week that it is providing emergency relief along the Colombian-Venezuelan border.

More to read: Venezuelan children are starving to death at an increasing rate