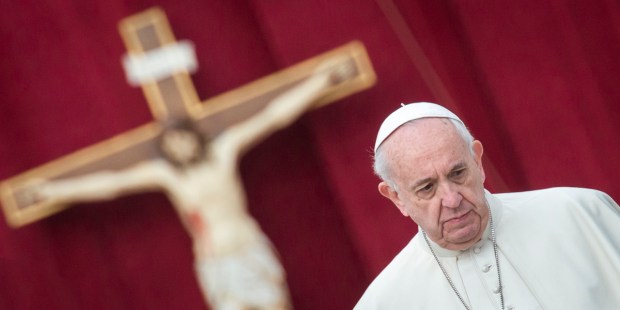 He’s acknowledged that Hell is a frightening concept, but says simply that “it is the truth”

Contrary to headlines around the world yesterday, Pope Francis has always insisted that there is a devil and there is a hell — and warned people against going there.

At a morning meditation in 2016, Pope Francis recalled how in his childhood he was taught about the four last things: “death, judgment, hell or glory.”

He directed one urgent warning against hell to the mafia in 2014.

“Convert! There is still time, so that you don’t end up in hell. That is what awaits you if you continue on this path. You had a father and a mother: think of them. Cry a little and convert.”

In his Message for Lent in 2016, he gave all of us the same warning, making clear that hell is not just for mafiosos:

“The danger always remains that by a constant refusal to open the doors of their hearts to Christ who knocks on them in the poor, the proud, rich and powerful will end up condemning themselves and plunging into the eternal abyss of solitude which is hell.”

So, why are we hearing reports that Pope Francis says there is no hell? The reports are from a particular journalist I wrote about in my book What Pope Francis Really Said:

Francis “sat down several times to be interviewed by an atheist friend of his, the retired journalist Eugenio Scalfari, a founder of the newspaper La Repubblica. Scalfari was 89 when he first interviewed the Pope in 2013 and 91 when his final interview was published in 2015. Each time, the former editor of La Republicca neither recorded the Pope nor even took notes. And each time, Scalfari published stories that attributed words to Pope Francis that sounded a little like things the Pope had said elsewhere, but with subtle differences that had significant implications.

“After his first interview in 2013, Scalfari confessed that he used ‘his own words’ to express the thoughts he attributed to the Pope. The text of that interview was published on the Vatican website nonetheless. In 2015, Vatican spokesman Father Federico Lombardi said Scalfari’s newest interview was ‘in no way reliable.’”

Read more:
Pope Francis: A Christian Can’t Have Both Heaven and Earth

About this latest interview, Vatican spokesman Greg Burke not only denied that Pope Francis told Scalfari, now 93, that there was no hell — he denied that Francis gave the journalist any interview at all. Burke said the pope’s conversation with his old friend was a “private meeting for the occasion of Easter, however without giving him any interview.”

“What is reported by the author in today’s article is the result of his reconstruction, in which the literal words pronounced by the Pope are not quoted,” said the Vatican communique. “No quotation of the aforementioned article must therefore be considered as a faithful transcription of the words of the Holy Father.”

In fact, the pope could not declare there is no hell even if he wanted to (and again, what we’ve shown so far indicates he doesn’t want to.)

Read more:
Pope in Padre Pio’s hometown: The devil gets inside us

The Catechism of the Catholic Church says:

“The teaching of the Church affirms the existence of hell and its eternity. Immediately after death the souls of those who die in a state of mortal sin descend into hell, where they suffer the punishments of hell, ‘eternal fire.’ The chief punishment of hell is eternal separation from God, in whom alone man can possess the life and happiness for which he was created and for which he longs” (CCC 1035).

Why is there a hell at all? For the same reasons there is a devil: God gave us real freedom, and we can really choose to follow him — or not.

This is why St. John Paul II called hell “the ultimate safeguard of man’s conscience.”

Good Friday, the day Jesus saved us, is an excellent day to think of hell; it is the day the Divine Mercy novena begins. Find it here.

Read more:
What’s heaven like, and who gets in? Pope Francis responds