A new flame in Catholic music: The Vigil Project 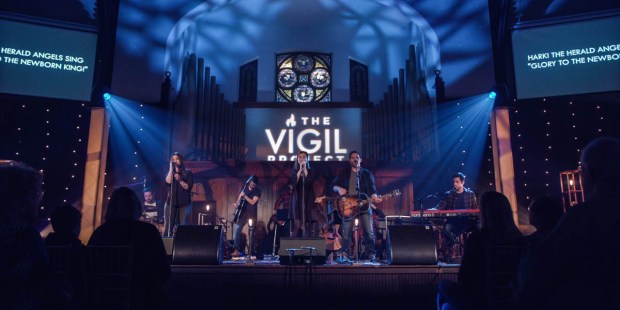 Upon The Vigil Project’s release of their new single “Hosanna,” Cecilia Music talked with Andrea Thomas, the group’s lead singer.

CECILIA MUSIC: Andrea, thanks for your time. We just listened to “Hosanna” and we loved it! Before talking about the song,  can you tell us more about The Vigil project?  It’s a really original name for a band!

The Vigil Project started from a group of Catholic artists who all had a common desire in their hearts to make a gift of beauty for the Church. That was the start of this collaboration. We recognized that we could offer something much greater as a community than we could ever offer on our own, and we wanted to give the best of what we have. And we very much thought it would be a one-time project. Well, that was two years ago, and it has since spiraled into more than we ever imagined! We live-video and live-audio recorded that project (which was a 7-song music series for Lent and Easter) in 2016, and within one month we were viewed in over 100 countries. We knew God was up to something bigger than any of us initially realized. Since then, we have written and released a second series for Advent and Christmas, and along with other projects this year, we just released a new single on Palm Sunday for Holy Week called “Hosanna.” After that first series released, we also started to receive multiple inquires to come pray and worship with various communities. It’s hard to believe that we just concluded our fifth music tour this Lent. Our name comes from the call in our hearts to “keep watch and pray” – we realized that this is at the heart of what we are doing: our mission as a community of artists is to create multimedia resources for an authentic encounter with God, who is Beauty Himself. To essentially hold “vigil” in our hearts during the sacred seasons of the Church calendar, also recognizing that humanity, at large, is in constant “vigil” for the second coming of the Lord. We seek to keep watch and pray – and to help others do the same. That’s where “The Vigil Project” name comes from.

“Hosanna” is an outburst of faith. Who wrote and what inspired this song?

As a group, we were approaching the start of our Lenten tour and had this vision that we wanted the nights to be a journey through the Gospel narrative of Jesus’ Passion, death, and Resurrection — from “Hosanna” to “Alleluia.” The more we prayed into this, the more we recognized just how prominent this proclamation of praise is throughout the Holy Week Gospels, though it isn’t always offered in spirit and truth. On Palm Sunday, we cry out with those who greeted Jesus as He entered Jerusalem, proclaiming Him king, offering perhaps an earthly crown of praise. This of course leads us to the moment just a few days later on Good Friday when we cry out with mocking praise “Hail, King of the Jews.” In effect, we betray Jesus with the lip service of our praise. But ultimately, we’re invited to participate in the song of Heavenly praise of Jesus, the One victorious over death. This is the true praise and worship we desire to offer. Our hope in writing “Hosanna” is that it offers a doorway into that song of heavenly praise that moves us past the false praises of earth.

Which is the passage that strikes you the most when you’re singing it, and why?

That’s a great question. I would have to say, “we worship and we doubt,” which is drawn from Matthew 28:17.  Speaking only for myself for a moment here, I definitely have a solid dose of melancholy in me! There is a “doubting Thomas” inside of my heart sometimes … and in reality, we don’t (and can’t) offer a perfect song of praise. I have doubt, fear, unbelief … and yet Jesus gives us the gift of the Holy Spirit to proclaim as we ought. Regardless of the disposition of our hearts, “Hosanna” is sung without end by both Heaven and earth. The reality stands before me when I sing that line, that it doesn’t matter how my fragile and changing emotions feel in any given moment – the Truth remains that Jesus is Lord, and there is an invitation there drawing me out of my fear and doubt and into that song of praise.

How does your Catholic faith inspire your music?

That’s loaded question! But in a nutshell, our journeys of faith (like everyone else’s) have had their ups and downs. Moments of incredible faith and moments of heart-wrenching doubt. Is that the human journey? We really believe in authenticity when we write and produce our music. I have often compared releasing music to publishing my journal. It’s incredibly vulnerable and sometimes you feel exposed. But I think that’s the point. I think artists have a specific call to be willing to be seen. All of us at The Vigil Project feel that prompting of the heart to be seen as we are. And again, coming back to the community aspect of what we do, we all have different portions of our journey to contribute, and God has used it all.

What is your background?

All of the collaborators in “The Vigil Project” have incredible diversity in our backgrounds; I think that’s part of the beauty of this project. From music production, to video production, to logistics, fitness, speech pathology, and my background: which is music, theology, and finance. Community is definitely the linchpin to the strength of our group, without a doubt. It’s been really amazing to see Providence use all of us in various ways in this project!

You’ve mentioned that The Vigil Project is a collaboration. Who are those collaborators and how do they actually collaborate?”

Yes! The collaborative nature of this project has been absolutely essential. I am so grateful for our team. Those of us who are Catholic artists in our own right came together for this project and partnered with 4PM Media and Papercastle Records for the production to make it happen. It has been a real testament to all of us what the power of community can do, and also creating a gift for the Church that is bigger than any one name or personality. “Hosanna” is a perfect example of how this collaboration works: we had a vision for this song on our hearts, and Shawn at Papercastle Records helped us express it in a meaningful way in the production process. All of our gifts working together to make a gift. I also have to mention the caliber of expertise and creativity from our partners and also from the artists I have the blessing of working alongside with The Vigil Project. We really believe that God is all things excellent, and that the quality of art we produce is imperative for the sake of deep encounter. We push each other to be better than we were the day before. That is another huge gift that comes with working as a team. And humbling sometimes, too!

What do you have in the works now?

After two back-to-back seasons of touring in Advent and Lent, we’re really excited to be entering a season of creative growth. In praying about our mission — to give beautiful music, media, and resources to the Church — we decided last year to become a nonprofit organization. In this way, we hope to raise the funds to continue producing beautiful and high-quality content that we can give away. We want this to always be a gift so that anyone who wants it can have it. We want it to be a means of deep encounter and deep prayer, and so in our hearts: it belongs to the Church.

We will be releasing our second donor-funded music video series this spring. We live-recorded one of the nights of our tour so that those who aren’t able to come in person to one of the nights can still experience it. We can’t wait to share it!

You’ve mentioned your touring schedule a few times. Can you tell us more about what this looks like when you go out, and how one would go about bringing you to their own community?

Touring has been one of the greatest joys for us because we have the opportunity to worship and pray with the grassroots Church. People who are going through the same day-in-and-day-out things we are. We essentially tour twice a year during Advent and Lent, and also a few other events throughout the calendar year, as well. We personally receive all of our tour inquiries via our website (thevigilproject.com), and we work so hard to make it work for any community and circumstance.

The song and lyric video is on our website: https://www.thevigilproject.com/single-hosanna

Hometown: We are from all over the United States, and our headquarters are in New Orleans, Louisiana, USA

Current City: Same as above!