Holy Week with the holy martyrs: Vigil in Rome celebrates our family witnesses 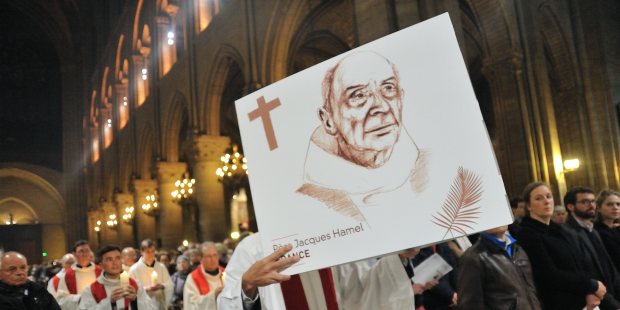 The Frenchman Jacques Hamel, the Italian Pino Puglisi, and the El Salvadoran archbishop Oscar Romero all offered their lives for Christ and to testify to the Gospel. The names of these three priests were cited alongside those of dozens of other martyrs from around the world during a large ecumenical vigil organized on March 27, 2018. Among the honored martyrs were many priests but also religious and lay people. All are witnesses of the faith.

The prayer vigil was organized in the Basilica of St. Mary of Trastevere, a few minutes from the Vatican. We can get some sense of its importance by the fact that it was presided over by Cardinal Marc Ouellet, prefect of the Congregation for Bishops. The basilica, one of the oldest in Rome, was packed with people. The entire assembly, composed of Catholics, Orthodox, and even Anglicans, prayed with one heart for the Christian martyrs. Songs in all languages ​​punctuated the celebration, paying tribute to these witnesses from around the world.

After reading a psalm— “My help will come to me from the Lord” (Ps 120)— and the proclamation of the Gospel of the Beatitudes, the true standard for followers of Christ, the names of Christians who “offered their lives for the Gospel” were solemnly presented, like so many beads of the Rosary.

“Our time is that of the ecumenism of blood,” said Cardinal Ouellet during his homily, echoing the words of Pope Francis.

Our time, he continued, is littered with martyrs like never before, from all of the Churches combined. For the prelate, paying tribute to them brings us closer to Christ and thus brings Christians closer together. It’s about bearing the supreme testimony of the gift of life proudly and in unison. This is the most profound way to reconcile Christians of different faiths, the Canadian cardinal insisted.

The slow litany of names reflected the diversity of these supreme gifts illuminated by the Gospel. Nuns spent themselves to the last drop accompanying the sick and the poor, contracting in turn the deadly viruses. Christians were tortured and killed by pure hatred of their faith in Jesus Christ. Cases in point: the Armenians in 1915 but also the five women from Russian Dagestan last February. To these witnesses of yesterday and today, Cardinal Ouellet did not fail to add the victims of the conflicts raging in Burundi and Yemen.

For the prefect, these Christians—well-known or anonymous—are bearers of a message of hope and faith: “Their shed blood is Christ’s, which is still flowing today.” It is a “duty of memory to praise God for the grace of their testimony,” he insisted. And the faithful must invoke the Holy Spirit to find strength to serve and love like them.