These amateur detectives identified a mystery woman from 1971 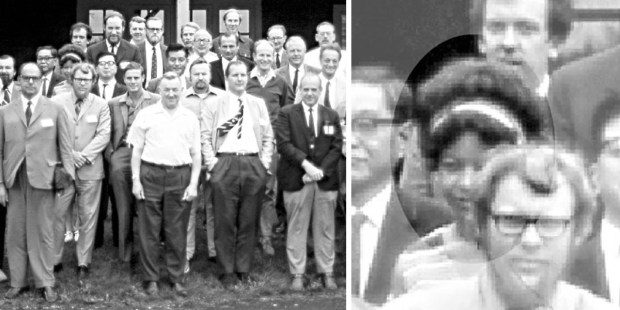 Without their motivation, she may never have been given credit for her accomplishments.

The world of science has long been dominated by men, so when Candance Jean Anderson found a group photo from the 1971 International Conference on Biology of Whales, she wanted to know who the lone woman in the group could be. But, though the articles recording the events named every man in the photo, the woman was marked as “not identified.”

The woman in this photo was an attendee at a 1971 International Conference on Biology of Whales.

She is the only woman, & the only one captioned "not identified" in the article I found the photo in. All the men are named.

Can you help me know her? pic.twitter.com/MifZvdRXRr

Suzanne—who helped coordinate the 1971 conference & aided in MANY ways surrounding the event—agreed to take a look at our pictures to see if she can remember who this woman is.

Massive thanks to @themediawitch for reaching out to Suzanne.

After tracking down conference proceedings, a few false leads, the coordinator of the event, and some of the men in the photo, the evidence seemed to suggest that the mystery woman had worked as an administrator at the conference.

Meanwhile another Twitter user reached out to someone from the Smithsonian who identified the woman as Sheila Jones Minor.

Well, @AllenZiphiid72 reached out to *Don Wilson* (Curator Emeritus of Mammals at the Smithsonian).

Don agreed with what Bob had written:

"Her name is **SHEILA JONES**…" maiden name Minor. She worked as a Collections Technician in mammals with FWS. pic.twitter.com/gseQ026VvW

Candace managed to track down Sheila herself, who confirmed herself in the photo at the conference in 1971. But that wasn’t the best part. The woman that some of the men had remembered as some kind of administrator was, in fact, much more.

…Shelia was NOT “just admin.” Oh no. pic.twitter.com/Lnbjv12vAT

A biological research technician at the Smithsonian, Sheila held a Master of Science degree from George Mason University and contributed to several conferences throughout her career, as well as serving for federal agencies for 35 years and standing on the Smithsonian Women’s Council and the American Society of Mammalogists.

She participated in a two-island study of the mammals inhabiting the Poplar Islands in 1973–1974, and presented her findings at the 55th Annual American Society of Mammalogists Meeting in 1975.

This included her belief of natural extinctions of some species on the islands. pic.twitter.com/bV3aKVwWIP

In the end, Sheila’s story wasn’t too difficult to find. It just required attentive and inquisitive people who cared that no one be overlooked.

Candace said she hopes that all who participated in and followed along their investigation were inspired by the women they came across who trailblazed their way through the world of science.

This entire thread. Adding diversity in the sciences still needs work, and women in science still have some hills to climb, but there are groundbreaking POC who never get a mention. I'd consider this woman to be one of them. THEY FOUND HER! @hormiga @MatthewACherry https://t.co/jy7WWDFFx0