Allow St. Therese to introduce you to Our Lady of the Smile 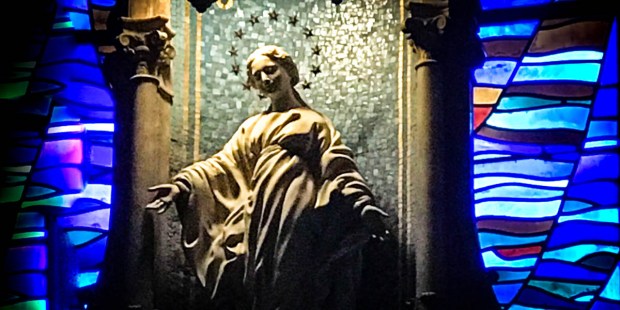 The Queen of Heaven looked tenderly on the future saint when she was only 10 years old.

St. Therese was born January 2, 1873. When she was 10 years old, the “Little Flower” miraculously recovered from an unknown and life-threatening illness. This was also the beginning of the devotion to what became known as Our Lady of the Smile.

Therese’s mom, St. Zelie, had begun to complain of breast pain in 1865, eight years before Therese was even born. In 1876, doctors told her of her condition. Zelie died of breast cancer on August 28, 1877. She was 45 years old.  Her youngest child, Therese, who was only four years old, was crushed. Years later she would write that “the first part of my life stopped that day.”

Zelie Martin had asked her husband, Louis, to have Pauline look after Therese after she had passed. Pauline was 12 years older than her little sister and had been acting as a surrogate mom for Therese while their mom was sick. Therese loved Pauline very much and felt safe and secure with her by her side.

In October of 1882, when Therese was nine years old, Pauline entered the Carmelite monastery at Lisieux. Pauline was the child’s “second mother” and, once again, Therese was crushed. She believed that since Pauline was cloistered, she would never see her again. She cried, “ — in the depths of my heart, I know Pauline is lost to me.”

Under such strain, Therese began to show signs of illness. Pauline’s departure for the Carmelites had jump-started her memories of her mom’s passing. She wanted to join the Carmelites right away, but she was much too young. The three forces collided and Therese got sicker and sicker. Convulsions, fever, and hallucinations began to overwhelm her. Her body exhibited tremors and her teeth clenched, and she could not speak. One doctor suggested that she was “emotionally frustrated and was experiencing a neurotic attack.” The poor child was a mere 10 years old.

Read more:
My little sister joined a convent. So why am I this angry?

The Martins had a beautiful statue of Our Lady of Victory. Louis Martin had been given the statue by a lady who knew him, and he placed the statue in his garden. When he and Zelie got married, the statue was moved into the house and given a place of honor. When the children were old enough, the entire family would pray before the statue.

The statue was three feet high and covered with a varnish that made it look like marble. The children loved that statue, and they would decorate it with flowers from the garden.  Their father told them they might wear out the statue from kissing it so much.

Therese was now suffering from severe headaches, strange apparitions and everything seemed to terrify her. She thought her bed was surrounded by steep cliffs and for a short period of time, Therese could not open her eyes.

During this time the statue was in the room with Therese. On May 13, 1883, Marie, the oldest sister, was sure Therese was dying. She fell to her knees before the statue, begging Our Lady to cure her baby sister. Leonie and Celine came in and joined Marie in prayer.

Marie looked over at Therese and noticed that her little sister seemed to be transfixed by the statue. But Therese was not looking at the statue. Rather, in a state of ecstasy, she saw the Blessed Virgin standing near her and that is who she was looking at.

Therese said later that Our Lady’s face glowed with a glorious beauty, but it was her wonderful smile that filled the girl with joy. It was like a warm ray of sunshine. When everything was over, a period that lasted about five minutes, Therese Martin was cured. Her sisters noticed two large teardrops fall from each eye. Later, when Marie asked her why she cried, she answered, “I cried because Our Lady had disappeared.”

Thus began the devotion known as “Our Lady of the Smile.”

In St. Therese’s autobiography, the Story of a Soul, on the first appendix page there is a prayer she carried with her the day she took her vows as a Carmelite. The date was September 8, 1890. (Interestingly, that is the day the Church celebrates Our Lady’s birthday.) The last paragraph of that prayer is as follows:

Jesus, allow me to save many souls,
Let no soul be lost today.
Let all souls in purgatory be saved.
Jesus, pardon me if I say anything I should not say, I only want to give you joy and to console you.

St. Therese of Lisieux, please pray for us all.