Where is Jesus when he doesn’t rescue us from our pain? 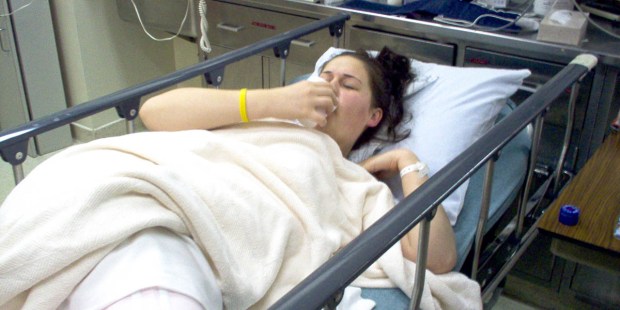 What was the point of “The Harrowing of Hell”?

I don’t remember a lot about being in labor, except the building sensation of dread as each new contraction grew, peaked, and then faded, leaving me waiting for the next wave of pain to hit. As I could feel the next one begin, I’d reach for my husband’s hand, squeezing it as hard as I could, as if I could somehow bring him into the experience, let him share the pain. He would have shared it with me, if he could.

The labor is over now, and family life has settled down to a peaceful rhythm. I am sitting with my new child wrapped up against my chest, with the subtle smell of her head and breath filling my mind as I write. It’s been a good recovery, except for one hitch — I developed a condition called Dysphoric Milk Ejection Reflex. It’s a strange thing. Essentially, as my body produces milk, my prolactin levels spike, and my dopamine levels plummet. Like clockwork, the minutes before my milk comes in, I sink into a sudden place of dread and depression. Then the milk is there, and the mood lifts, as if it was never there. This, they tell me, is just what dopamine depletion feels like.

It feels like a different kind of labor, an emotional contraction. I squeeze my husband’s hand (when I can reach him) and try to convince myself that it’ll be over soon, that there’s nothing to be afraid of, that it’s just an imbalance in my neurotransmitters. It peaks, then fades away, leaving me relieved, but braced for the next one, which might come at any time.

I can’t get myself to pray, “Jesus, make it stop.” I have a sense that he is asking me to work with the body he’s given me, and that a brain that struggles with it’s dopamine levels is part of how I am going to get to know him. So instead, I feel the panic set in, and I reach for his hand, to squeeze it as hard as I can. I pray, “Jesus, come with me.” If I am going to drop down into that dark and scary place, I don’t want to be alone, even if I know I won’t be down there long enough to drown.

Sometimes Jesus saves us. Sometimes he shouts “Lazarus, come out!” and we answer the summons, unwrapping ourselves from our burial garments, as we leave the tomb, marveling at his power, grateful for his love and for the tears that are still on his face. I wonder if more often, though, he doesn’t call us out — he comes in with us, instead. It was the last thing he said to us, after all: “I am with you always, until the end of the age.”

In the creed, we proclaim Jesus’ descent into hell, which preceded his resurrection. Couldn’t he have just called down to those souls, who had been waiting for him for so many hundreds of years? Couldn’t he have said, “It is finished, the gates are unlocked! Come and join me!” But the wording is so specific — he takes the trouble to go down to them, to meet them where they have been.

In the icons depicting what’s called “The Harrowing of Hell,” which show the Risen Christ pulling Adam and Eve out of their coffins, Jesus doesn’t lead them out gently by the hand. He actually seems to be yanking them out, pulling each of them out of their coffins by the wrist. You can see his strength,  and though he is clothed in white and risen from the dead, you can’t help but remember the effort it took to bring those two, and us by extension, back to life.

Labor contractions, and my little episodes of dopamine depletion too, are just a microcosm of what every human being has to experience. Suffering comes in waves, and when it lifts, it’s never for long — not in this life, before the heavens and the earth are made new. But until then, Jesus comes with us, if we invite him along. Then, when he is finally ready to heave us out of our coffins, and bring us blinking into his new creation, he isn’t far away.