Bieber agrees: “It’s not about a bunny” 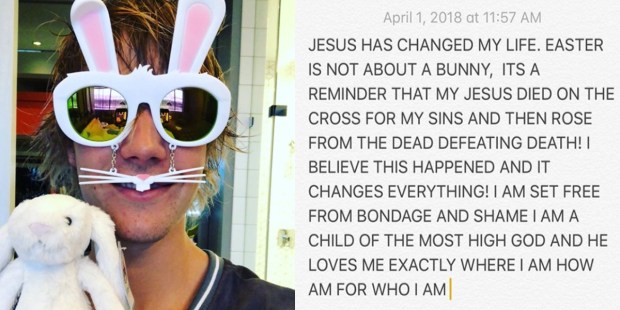 Just days after we argued to move past the Easter Bunny, Justin Bieber shared our sentiment. The mega-star stated to his 98.3 million followers that “Easter is not about a bunny, it’s a reminder that my Jesus died on the cross for my sins and then rose from the dead defeating death! I believe this happened and it changes everything!”

Justin Bieber is one of those rare stars whose life has been followed meticulously since his debut on Youtube, at just 14 years old. As he matured he began to get in trouble with the law and was found guilty of assault, reckless driving, and vandalism. Now, it seems the Bieb has turned a page on that chapter of his life and is focusing on his faith.

Justin has become a member of the Hillsong Church, which routinely draws celebrities to their services, including Bono, Vanessa Hudgens, Lil Wayne, and Selina Gomez. This community is also home of the Christian rock band Hillsong United, who perform at services every Sunday when they’re not on tour.

Bieber has been spending more time at Hillsong since he canceled the remaining dates in his latest tour, citing mental stress and the desire to “rededicate his life to Christ” as reasons for disappointing his fans. The Telegraph reports that he intends to make changes to his next album that will reflect the growth of his faith:

A week ago, sources told The Sun: “Justin is on the lookout for songs which really reflect where he is in his life in terms of spirituality.

“He has always been religious but the last two years have seen him grow closer to the Hillsong Church and it has changed his entire life. He has a totally different outlook now.”

Bieber went on to have a bit of fun trolling his fans; later in the day he posted again:

Remember when i said easter isnt about bunnies... well i lied