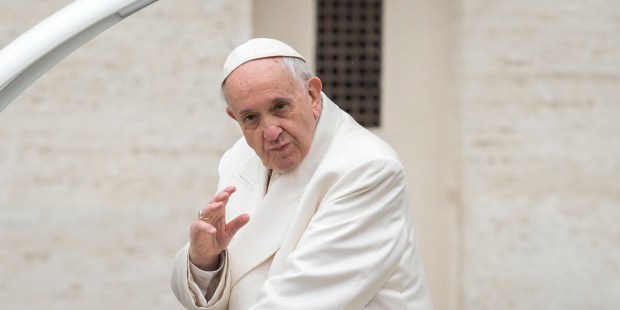 The close of Mass is really just the beginning, he explains, giving 5-word definition of Christian holiness.

Pope Francis today concluded his series of teachings on each part of the Mass (see links to the whole series below), emphasizing that the conclusion of the Mass is really just the beginning: “We leave the church to ‘go in peace,’ to take God’s blessing to daily activities, our homes, the workplace, and among the occupations of the earthly city, ‘glorifying the Lord with our life.'”

We’re definitely not intended to leave Mass with a “forked tongue,” Francis quipped, with “chattering and saying, ‘Look at him, look at her…’ with a forked tongue.” That would be a sign that “Mass has not entered into the heart.”

The pope said that we celebrate the Eucharist “to learn how to become Eucharistic men and women.”

“What does this mean?” he asked. “It means letting Christ act in our deeds: may His thoughts be our thoughts, His sentiments ours, His choices our choices. And this is holiness: to do as Christ did is Christian holiness.”

“To the extent that we subdue our selfishness, that is, that we allow to die that which is opposed to the Gospel and to Jesus’ love, a greater space is created within us for the power of His Spirit,” he continued. “Christians are men and women who allow their soul to be enlarged by the strength of the Holy Spirit, after having received the Body and Blood of Christ. Let your souls be enlarged! Not these narrow and closed, small, selfish souls, no! Broad souls, great souls, with grand horizons… Let your soul be enlarged with the strength of the Spirit, after having received the Body and the Blood of Christ.”

The Holy Father noted that the Eucharist is reserved after Mass (in a tabernacle) so that those who are sick might receive Him, and also to allow for the “silent adoration of the Lord in the Blessed Sacrament.”

“Indeed, Eucharistic worship outside of Mass, whether in private or communal form, helps us to remain in Christ,” he said.

Read more:
What is a tabernacle?

“The fruits of the Mass, therefore, are destined to ripen in everyday life,” he said, emphasizing that the Eucharist:

— separates us from sin

— renews, strengthens and deepens the bond with the Christian community to which we belong, according to the principle that the Eucharist makes the Church; it unites us all.

— commits us to others, especially the poor, teaching us to pass from the flesh of Christ to the flesh of our brothers, in which He expects to be recognized, served, honoured and loved by us.

Because our union with Christ is held in “clay vessels,” Francis said, “we have a continual need to return to the holy altar, until when, in paradise, we will fully enjoy the blessedness of the wedding supper of the Lamb.”

He concluded with an invitation to “be attracted with renewed faith to this real encounter with Jesus, Who died and rose for us, our contemporary. And may our life always be ‘in bloom’ in this way, like Easter, with the flowers of hope, of faith, of good deeds. May we always find the strength for this in the Eucharist, in the union with Jesus. Happy Easter to you all!”

Check out the previous catecheses on the Mass in this Wednesday audience series:

Communion in the hand vs. Communion on the tongue: Pope Francis responds