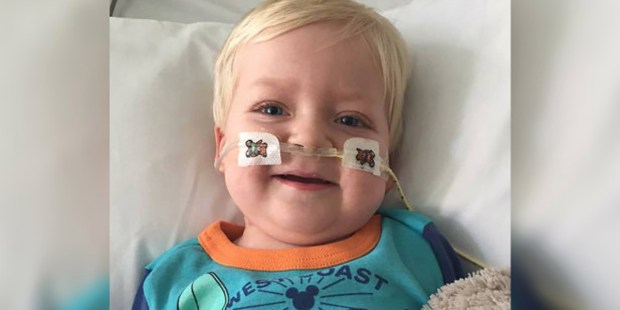 Young Dylan Askin stunned doctors with his recovery on the most holy weekend.

Back in 2016, Dylan Askin’s parents were given the news that their three-year-old son, who was in a coma after contracting a rare form of lung cancer, was not going to survive. Doctors advised them to turn off his life support and say farewell: it was on Good Friday. His parents told of their agonizing decision in The Telegraph: “He’s so close to his brothers it was such a hard decision, but the doctors said his organs were failing and there was nothing they could do.”

On Easter Saturday, his parents had him baptized, yet as they prepared to turn off the machine, they noticed him wiggling — a sign that there was still brain function. A consultant quickly confirmed that indeed his organs were not failing. The couple sat by their son’s bed over the Easter weekend watching their son gain strength. And as time went on, Dylan started to recover, with doctors ascertaining that he was stable by Easter Sunday. As Dylan’s mom, Kerry was reported as saying in News.Com.Au: “I was strong in the belief that Dylan was our Easter miracle.”

Kerry also explained how her eldest son, six-year-old Bryce, at first thought his brother “wasn’t coming back, and said: “Oh, so he’s like Jesus then.” To which Kerry replied: “You’re not wrong. He had just risen from the dead.” Dylan was eventually able to come off life support and begin breathing on his own just a week later, on his parents’ wedding anniversary.

Yet Dylan’s story is even more incredible when you consider that the toddler’s illness first came to light on the previous Christmas Day when his lungs collapsed. After tests and months of repeated illness, the youngster was diagnosed with pulmonary langerhans cell histiocytosis, a form of cancer that affects only 1 in 125 million three-year-olds.

As Dylan seems to have defied the odds and “risen from the dead,” his parents shared how traumatic the events were: “We just felt so awful when we had to say our goodbyes. And even when he recovered it was mixed feelings — I felt guilty about agreeing to turn off the machine.” However, now two years on their little Easter miracle has fully recovered, and as the Daily Mail reports, the family are actively involved in CLIC Sargent, a cancer charity that helps young people, selling Easter eggs to help raise funds.

Read more:
Young cancer survivors are being emotionally healed by the wind and waves