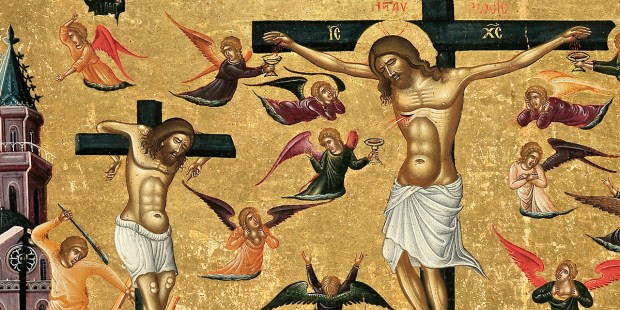 The ad was flagged as “shocking and excessively violent.”

Like many other Catholic institutions, Franciscan University of Steubenville, Ohio, used an image of Jesus crucified as part of its Facebook publicity last Good Friday.

But Facebook’s censorship team rejected the advertisement, labeling it—outside of the religious context and the historical significance of the event of Jesus’ crucifixion—as a “shocking and excessively violent” image, according to a spokesman for this Franciscan-run university.

Steubenville purchased 10 advertisements on Facebook to promote its master’s degree programs in theology, catechetics, and evangelization. In comments to Fox News, Steubenville’s director of internet communications, Tom Crowe, said that he doesn’t know why the platform only rejected the one that clearly depicts the San Damiano Cross, the cross most representative of Franciscan spirituality.

“It may have been the algorithm or a low level staffer who has something against Christianity,” said the spokesman. “For whatever reason, Facebook rejected the cross.” The San Damiano cross is of particular significance for Franciscans, as it is the one found in the small chapel in Assisi where St. Francis received from Christ his great mission to restore the Church.

On Wednesday, April 4, Facebook apologized for the error. As Crowe told Fox News, the apology came in the following terms: “Our team processes millions of ads each week, and sometimes we make mistakes.”

Certainly, there are different kinds of mistakes. This one was surely intentional, because Facebook’s own spokesman acknowledged that “this image does not violate our ad policies. We apologize for the error and have already let the advertiser know we approved their ad.”

The ad was officially approved the Monday after Holy Week. However, there is still doubt regarding the reason for the earlier rejection, on the very Friday when Christianity remembers the death of Jesus Christ on the cross.

This is even more suspicious, since—as Crowe told Fox News—“Facebook approved other ads with the exact same image, which again leads me to believe it wasn’t an algorithm, but was a low-level staffer who skims many, many ads and just had something personal against this one.”

“I’ll reiterate that I’m not claiming systematic religious bigotry at Facebook, but in this case it seems something like that happened in a one-off situation,” emphasized the university’s web communications director.

Crowe described the incident as a “teachable moment” that should serve as a reminder of the meaning of Christ’s sacrifice. On the university’s website, he wrote an article titled “He was rejected …” in which he reflects on the fact that this is the way humanity reacts to the idea that God humiliated himself to the point of death on a cross.

“This is sensational, this is shocking,” he wrote. “This is only possible because of the excessive violence that he endured for us.” At the end of his comments to Fox News, Crow took an evangelizing approach to the incident: “I hope people take another look at the cross and see what God did for us. Whether it’s a return to faith or an investigation of this weird thing called Christianity.”

With information from Fox News