What to do with the Doubting Thomas in all of us? 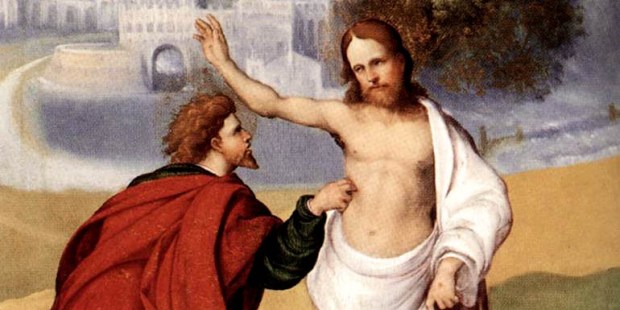 He was a skeptic until Christ came, but there was one thing the Doubter didn’t lose faith in — and that saved him.

Jesus said to him, “Have you come to believe because you have seen me? Blessed are those who have not seen and have believed.”

In those first days following the death and burial of Jesus, the Apostles were left adrift. After all, the One who had been their focus and point of reference through years of mission and service was gone. God had gone quiet, no longer speaking to them or guiding them. How could they make sense of everything that had happened to Jesus? Everything that had happened to them?

As their hopes crumbled around them, there was no escaping the darkness brought on by the Crucifixion. The disappointment and disillusionment of Good Friday had not yet been transformed into the light of Easter.

Then everything changed. But Thomas had been absent when Jesus first appeared to the Apostles on that first Easter Sunday. Should it be any wonder, then, that he would still be overwhelmed by Holy Saturday sadness?  And I don’t think it’s fair to fault Thomas for being skeptical at the stories of Mary Magdalene and others seeing Jesus. With these same themes in mind, Pope Francis has reflected, “Doesn’t the same thing also happen to us when something completely new occurs in our everyday life? We stop short, we don’t understand, we don’t know what to do. Newness often makes us fearful, including the newness which God brings us, the newness which God asks of us” (Homily for the Easter Vigil 2013).

Although Thomas did not initially believe in the resurrection of the Lord, he remained faithful to the call he had received from Jesus—the call to be a part of the community of the Apostles. While his doubts would not allow him to believe that the others had seen the Lord, Thomas never lost faith in their fraternity and it was ultimately in and through that community that Thomas finally encountered the Risen Christ.

Read more:
Yes, you can trust the Church

In The Genesee Diary, Henri Nouwen recalled that Didymus, the name of Thomas, means “twin” and that the Fathers of the Church had commented that all of us are “two people: a doubting one and a believing one. We need the support and love of our brothers and sisters to prevent our doubting person from becoming dominant and destroying our capacity for belief.” And so, we might say that the Church is inviting us reflect not so much on “Doubting Thomas” as on the living and dynamic faith of the community—the Church—of which Thomas was a part.

Like Thomas, we also experience the Resurrection within and through the faith of the Church as we meet Christ in Word and Sacrament. This is where we encounter the fullness of the mercy we celebrate on this Divine Mercy Sunday.

As Pope Francis has reminded us, “The Risen Jesus passed on to his Church, as her first task, his own mission of bringing to all the concrete message of forgiveness. This is the first task: to announce forgiveness. This visible sign of his mercy brings with it peace of heart and joy of the renewed encounter with the Lord” (Regina Caeli, April 23, 2017).

While we know that faith is a gift, believing is not automatic or easy. In fact, it is often easier for us to relate to the doubt of Thomas than to the sublime prayer and contemplation of the great pray-ers and mystics of the Church. Acts of terror, the threat of war, violence within our communities and families, discrimination, illness, and enduring hunger put our faith to the test. And yet, Easter reminds us that there is something more powerful than suffering and death: the love of the God who, in Christ, has taken upon himself our broken humanity. In the end, this is the mystery we celebrate on this Second Sunday of Easter, the Feast of Divine Mercy.

How have you encountered the Risen Christ during the Easter days?

When have your doubts and fears prevented you from recognizing God’s grace and mercy? Who or what strengthened your faith in those time?

How are you being called to share in the Apostles’ mission of proclaiming the good news of the Resurrection?

Read more:
When art came to the rescue of mystical love