When your kid has a stomach bug, can you be like Our Lady? 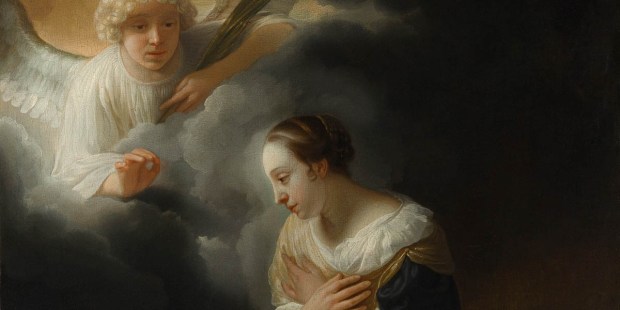 “Let it be done to me” has to continue to echo, just as Mary’s did.

This Monday’s Solemnity of the Annunciation is a confusing feast. Naturally, we celebrate Jesus’ conception nine months before his birth, on March 25. But about a third of the time, it falls during Holy Week or the Octave of Easter. Rather than ignore the moment God became man, the Church moves our celebration to the Monday after the Octave of Easter—this year, April 9. Which means that instead of remembering the Annunciation in the midst of the sorrow of the Passion, we’re listening to Luke Chapter 1 at the end of a week fueled by jelly beans and chocolate bunnies. It has rather a different flavor that way.

There’s something striking in the fact that the Annunciation is sometimes in Lent and sometimes in Easter but never overshadows Holy Week or the Octave. At the Annunciation, God became man for us. He knew all that would entail. His incarnation was his assent to Gethsemane, to Calvary, to the tomb and the resurrection. On the Annunciation, we celebrate every moment of the life of Christ, everything he came to do.

When the feast falls during Lent, we may meditate more on his coming to die for us. When it gets pushed after the Octave, we’re more inclined to focus on the joy of that day. Both are true. The Annunciation was the beginning of something by turns agonizing and glorious — and dull and awkward and tedious, as is every human life.

For Mary, too. Gabriel didn’t come to Nazareth with a detailed agenda for Christ’s life, a plan that Mary pored over before giving her assent. He offered cryptic messianic predictions and nary a word about sacrifice.

It didn’t matter. Mary wasn’t concerned with verifying the Lord’s plans before getting on board. She didn’t raise concerns about her role or make suggestions. When this immaculate woman was offered an unclear position, she said yes not to the job but to the Father.

“I am the handmaid of the Lord” might be translated “I’m God’s slave girl.” Mary isn’t concerned with her plans, just with his. So when there was no room at the inn, she breathed another fiat and brought her son into the world on a stable floor. When Simeon prophesied that a sword would pierce her, she didn’t lament, only pondered. When Joseph told her to flee, she didn’t bargain for time, just grabbed her boy and followed.

Just as the Son was consenting to his whole life on the day of the Annunciation, so was Mary—only Mary didn’t know what she was getting into. What she did know was this: she loved the Father. That was enough for her.

Is it enough for us?

We all have moments in our lives when God is inviting us to an entirely new path—when we get baptized, return to confession after a long time away, make a decision to live radically for Jesus, propose matrimony, enter seminary, quit a lucrative job, end an abusive relationship, adopt a child. Every one of those choices is a yes to the Father with no certainty of how life will go. Each fiat might lead to a thousand more moments of suffering and a thousand more moments of joy. Our call is, like Mary, to hand our lives over to the Father like blank checks. Then, every time we feel the weight of that decision, we say again, “Yes, Father. Let it be done to me according to your word.”

Our natural instinct is to want details. When will this happen? Why didn’t it work out? How am I supposed to get there? But at the critical moment in human history, a peasant girl given an impossible task didn’t ask any questions. She didn’t know when or how or where, but she knew who was asking. She knew the Father and that was enough.

Mary said yes to the unknown because the one who was asking was trustworthy. She spent the rest of her life saying yes, no matter how awful it got, because she knew him and she trusted. By her intercession, may we do the same.