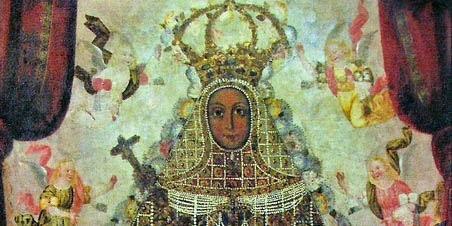 Did the name for Juan Diego’s mother actually come from this other devotion?

If you tell someone that you want to meet up in Portland, it’s important to specify whether you mean Maine or Oregon. Likewise, in her desire to show her closeness, Our Lady has appeared so many times that some of her titles and names have been associated with multiple images or shrines. Luckily Our Lady answers to all of the names we associate with her, but taking a look at some of her titles, and repeated titles, can be an interesting way of learning more about her.

Our Lady of the Rosary, for example, is regularly used in reference to the image of Mary from her appearance to St. Dominic, as well as to the image in Chiquinquira (Colombia). It is also the title we use to invoke the Blessed Mother on the feast honoring her intercession in the Battle of Lepanto, and one of her titles at Fatima.

The Black Madonna is another example. What image comes to mind when you hear that title? A friend of mine once told me that she’d seen a picture of the Black Madonna and would love a copy. I sent her an image of Our Lady Czestochowa; she was actually looking for the icon of Our Lady of the Gate of Dawn in Vilnius.

I have since found out that there are many icons and statues of Our Lady affectionately referred to as the “Black Madonna,” including Our Lady of Guadalupe. No, not the one in Mexico, but a lesser known, yet no less powerful image in Spain. Our Lady of Guadalupe of Extremadura predates the Virgin of Guadalupe by centuries, and possibly influenced the name of the latter apparition.

At the time that the Virgin appeared to St. Juan Diego on Tepeyac Hill, the Spanish explorers in the region were very familiar with the Spanish Our Lady of Guadalupe and may have identified the Mexican apparitions as a sign of Our Lady of Guadalupe’s presence in the New World. (An alternative theory suggests that the name Guadalupe came about through a consistent mispronunciation of an indigenous term unknown to the European explorers.)

According to tradition, St. Luke the Evangelist himself carved the original image of Our Lady of Guadalupe. The statue made its way to Spain in the 6th century, when Pope Gregory I gifted it to St. Leander of Seville.

When the Moors invaded Seville in the early 8th century, someone buried the image in a cave in the Extremadura region of Spain. The cave was located near the Guadalupejo (now called Guadalupe) River. More than 600 years later, in the early 1300s, a Spanish shepherd saw an apparition of the Blessed Mother who directed him to the whereabouts of the statue.

While the early history of the image is based on tradition, the story of the image from the 1300s on was clearly recorded. Devotion to the image quickly grew, and the original, simple statue was soon clothed in splendid robes, a witness to Blessed Mother’s glory and the powerful miracles and graces obtained through her intercession.

King Ferdinand and Queen Isabella of Spain had a devotion to Our Lady in her manifestation as this image; Christopher Columbus named the “Santa Maria” vessel after her. When Columbus returned safely from his voyage to the new world, he visited the shrine of Our Lady of Guadalupe in Extremadura.

In 1955, Pope Pius XII named the shrine a minor basilica.

Our Lady of Guadalupe, pray for us!

Read more:
Mary’s intercession is especially fertile in her role as Our Lady of the Milk