What does Pope Francis think about holiness?: Preview to ‘Rejoice and Be Glad’ 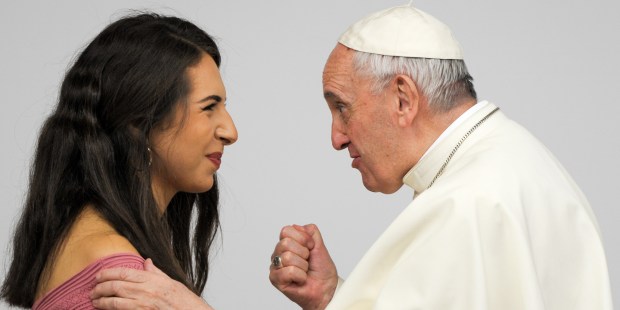 Alessia GIULIANI I CPP I CIRIC
Share
Print
I.Media for Aleteia - published on 04/08/18

“The only real sadness in life is not becoming a saint.”

Expected April 9, the third apostolic letter of Pope Francis – Gaudete et exsultate – will address the theme of holiness. It is a theme that has run through Pope Francis’ entire pontificate, and which he often mentions to encourage the faithful to practice Christian perfection “in the little things of everyday life.”

The Church is full of “everyday saints,” said Pope Francis during the general audience of May 14, 2014. These “hidden saints among us” fulfill their duty in their “ordinary daily routine.” They are “fathers, mothers, brothers, sisters, citizens. We have many of them! Let us thank the Lord for these Christians who live in hidden holiness.”

For Peter’s Successor, “there is no need to be bishops, priests or religious” to be holy. Because of their baptism, Christians are “all called to be saints,” he said in another audience at St. Peter’s Square on November 19, 2014, thus renewing the universal call to holiness, already expressed by the Second Vatican Council, and before that by St. Francis de Sales in particular (1567-1622), with his Introduction to the Devout Life.

“When the Lord invites us to become saints,” said the pontiff during that audience, He invites us to “live and to offer with joy every moment of our life, by making it become at the same time a gift of love for the people around us.” Thus, according to the head of the Catholic Church, holiness “begins with little everyday things.”

It is therefore by living “with love” and in “little everyday things” that Christians are called to holiness, he insisted, whatever their state in life. At a general audience on June 21, 2017, the Bishop of Rome declared that the Christian life was “not an unattainable ideal.”

“The only real sadness in life is not becoming a saint.”

“Sanctity does not consist especially in doing extraordinary things, but in allowing God to act,” Peter’s Successor continued. Then, he quoted the French mystic Leon Bloy (1846-1917) as he had done during his first Mass as Supreme Pontiff: “The only real sadness in life is not becoming a saint.”

In April 2013, the head of the Catholic Church again emphasized the concept of a “middle class of holiness” during a homily at the Basilica of St. Paul Outside the Walls. This phrase was created by another French author, Joseph Malègue (1876-1940). “We can all belong” to that class, the pope insisted.