Mexican border “not a war zone,” say US bishops 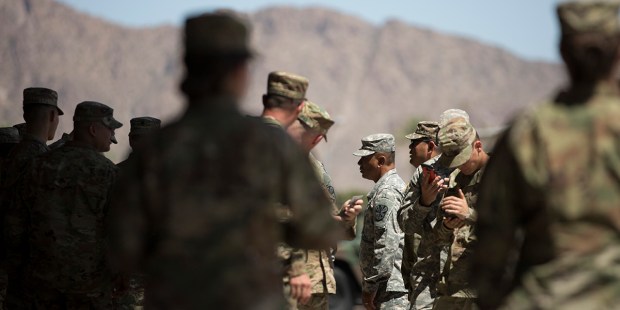 The eight bishops of U.S. dioceses along the southern border are “deeply concerned” by the announcement that the National Guard will be deployed on the border.

The bishops released a joint statement April 6 decrying “continued militarization of the U.S./Mexico Border,” charging that it “distorts the reality of life on the border.”

“This is not a war zone but instead is comprised of many peaceful and law-abiding communities that are also generous in their response to human suffering,” said the statement, signed by the archbishop of San Antonio, the bishops of Brownsville, San Angelo, Laredo, and El Paso, Texas; Tucson, Arizona; San Diego, California, and Las Cruces, New Mexico.

The letter was issued in the wake of news around Easter that President Donald J. Trump was alarmed by a “caravan” of migrants moving north through Mexico to escape dangerous conditions in Honduras and other Central American countries. Many of the migrants have said that they plan to seek asylum in the United States.

In a separate statement, Bishop Mark Seitz of El Paso asked, “Is our nation reacting to a ragtag group of Hondurans who are fleeing for their lives seeking refuge?  They are fleeing from a nation controlled by narco-trafficking gangs flush with cash provided by our nation’s insatiable appetite for illegal drugs.”

In their letter, the border bishops acknowledge the “right of nations to control and secure their borders [and] the need of nations to respect the rule of law,” but note that U.S. law “provides that those arriving to our country fleeing persecution are entitled to due-process as their claims are reviewed.”

“Seeking refuge from persecution and violence in search of a peaceful life for oneself and one’s family is not a crime,” the bishops state. “Our faith calls us to respond with compassion to those who suffer, and to live in a spirit of solidarity with all human beings. We remain hopeful that our local, state and federal officials will work collaboratively and prudently in the implementation of this deployment, ensuring that the presence of the National Guard is measured and not disruptive to community life. We are also deeply concerned that at this time divisive rhetoric often promotes the dehumanization of immigrants, as if all were threats and criminals. We urge Catholics and people of good will to look past the dehumanizing rhetoric regarding immigrants and remember that they are a vulnerable population, our neighbors, and our sisters and brothers in Christ.”