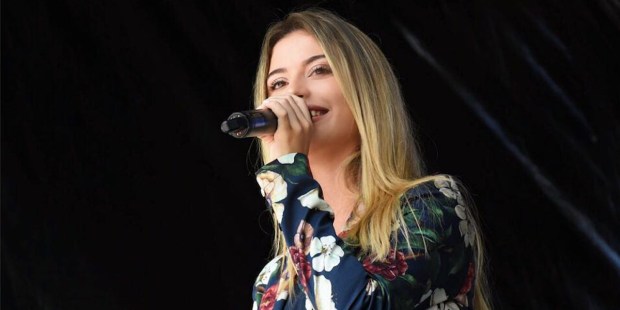 Camila Holanda tops 2 million views with a song dedicated to the Virgin Mary.

At only 18 years old, the singer Camila Holanda has earned her own place on center stage of the Catholic music scene. The young Brazilian girl, who was born in João Pessoa, Paraiba, started to sing when she was 2 years old, with her grandfather’s support. Her career as a singer began when she was 15, when her mother Ivana Holanda decided to record three of the songs Camila sang at her debutante party. With the release of those three songs, nobody could have imagined  how far she would go.

“We just wanted our daughter to sing three songs to Our Lady at her debutante party. That was the point. However, Our Lady surprised us, as always. The tiny project gave life to the first album ‘TE IMITAREI’ [I’ll imitate you], containing 11 tracks, and then God showed us that there was a greater call, and this way He conducted Camila’s and our lives, so that she accomplished this calling,” said Ivana, Camila’s mother.

Since her first album was released, Camila has dedicated herself to creating and promoting Catholic music. On her YouTube channel and through social media, she shares her songs of praise, plays other artists’ music, and posts interactive videos focusing on teen life.

Camila’s performance of the song “Eu sou de Nossa Senhora” [I belong to Our Lady], by Carlos Renê, led to a number of invitations, one of which she found very touching: “A woman called Florinda Marques contacted me after she heard the song via Facebook and invited me to be the Maid of Honor of an association which helps poor children in Mozambique, Africa. I accepted, and God took care of everything. I’ve never imagined that I would sing abroad, and Our Lady gifted me,” said Camila with emotion.

She also affirmed she was not expecting that such a simple homemade video clip could become so successful: “I couldn’t imagine what would happen after I recorded this song in a very amateur way. We made it at home, and then we posted it. The mark of 2 million views really got me, and the people’s faith testimonies, the messages they sent me every day about Our Lady love experiences … That makes me have faith and I believe we can plant good seeds,” concluded.

The young singer will perform in a benefit concert next April 28, at Fatima, Portugal, where she will receive the Maid of Honor title of the “Mãos Unidas com Maria” [Anointed Hands with Mary] Association. Since October 2017, Camila has been part of Sony Music Gospel, which released the video clip “Lugar Seguro” [Safe Place], with new releases expected soon.