“God has tattooed my name on his hand!” Pope Francis is blown away by God’s mercy 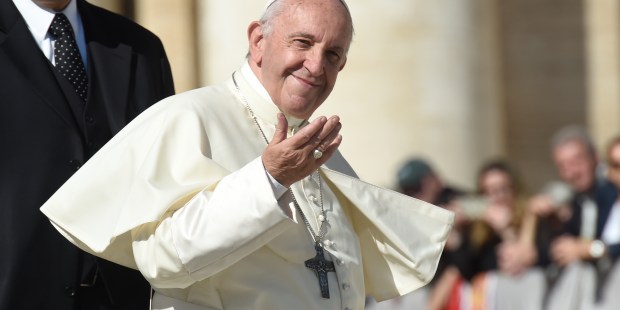 With in-depth address to priests charged with ministry of Confession, pope delves into his favorite aspect of God.

Among Pope Francis’ favorite themes is surely the topic of mercy. His papal motto speaks to mercy and he declared an entire jubilee year to reflect on this defining characteristic of God.

This week, he had an opportunity to offer a lengthy reflection on mercy to those charged with bringing God’s mercy to the faithful: a group of priests who took on a role during the jubilee (since extended) as “missionaries of mercy.”

These priests are committed to providing the Sacrament of Confession in a particular way, and the Holy Father spoke to them about their ministry. The address, which the pope warned would be a “little lengthy,” gave Francis an opportunity to delve into the doctrine of mercy and what it implies for priest-confessors.

“With your ministry you are a concrete sign that the Church cannot, must not and does not wish to create any barrier or difficulty that may hinder access to the Father’s forgiveness,” he said. “The ‘prodigal son’ did not have to pass through customs: He was welcomed by the Father, without obstacles.”

The pope drew much of his reflection from Christ’s story of the prodigal son, a theme that he has touched on in other addresses. He also looked at length at two passages from Scripture: From Isaiah 49: Can a mother forget her child? Yet even if she forgets, I will never forget you; and from several chapters of 2 Corinthians, where St. Paul urges us, “be reconciled to God.”

“‘We implore you’ – it seems [Paul] is on his knees,” the pope said, quoting the Apostle, “‘on Christ’s behalf: Be reconciled to God.’ The message we, like ambassadors, bear on Christ’s behalf is that of making peace with God. Our apostolate is an appeal to try to receive the forgiveness of the Father. As you can see, God needs men who bring His forgiveness and His mercy to the world.”

Francis went on to reflect about Paul’s personal testimony.

“I think of the words Paul wrote at the end of his life, by now elderly, to his faithful collaborator Timothy, whom he left as his successor in the community of Ephesus,” he said. “The Apostle thanks the Lord Jesus for having called him to the ministry; he confesses to have been ‘a blasphemer and a persecutor and a violent man’; yet – he says – ‘I was shown mercy.'”

The Holy Father considered how Paul could have, at the end of his life, described himself differently. “He could have made a list of his many successes, named the many communities he had founded… instead, he prefers to underline the experience that most struck him and marked his life.”

The pope also considered how God always takes the first step — as he did in the case of the prodigal son, and as he does with us all.

“Reconciliation is not, as we often think, a private initiative of ours or the fruit of our commitment,” Francis said. “If this were the case, we would fall into that form of neo-Pelagianism which tends to overestimate man and his projects, forgetting that the Saviour is God and not us. We must always reiterate, but especially regarding the sacrament of Reconciliation, that the first initiative is of the Lord; it is He who precedes us in love.”

The pope drew from this doctrine a concrete point that he said confessors must always remember:

“When a penitent approaches us, it is important and consoling to recognize that we have before us the first fruit of the meeting that has already taken place with the love of God, who with His grace has opened his heart and made it willing for conversion. Our priestly heart should perceive the miracle of a person who has met God and who has already experienced the efficacy of His grace.”

As well, Francis reflected on the experience of sin and suffering, and the great sorrow of feeling abandoned.

“The cry of Jesus on the cross: ‘My God, my God, why have You forsaken me?’ gives voice to the abyss of abandonment. But the Father does not answer Him. The words of the Crucifix seem to resonate in the void, because this silence of the Father for the Son is the price to pay so that no-one may feel abandoned by God.

“The God Who loved the world to the point of giving His Son, to the point of abandoning Him on the cross, He will never abandon anyone: His love will always be there, close, bigger and more faithful than any abandonment.”

Regarding this fidelity, the Holy Father underlined a particular image from Scripture.

“Isaiah, after reiterating that God will not forget His people, concludes by saying: ‘See, I have engraved you on the palms of my hands.’ Incredible: God has ‘tattooed’ my name on His hand. It is like a seal that gives me certainty, with which He promises that He will never stray from me.”

The whole text is a very worthwhile read. Find it here.